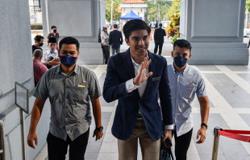 KUALA LUMPUR: The High Court was told that Syed Saddiq Syed Abdul Rahman had a discussion with members of a WhatsApp group on the statement to be issued to the media about the RM250,000 that went missing from his home.

"In the WhatsApp group, Syed Saddiq discussed the narrative to be issued to the media about the missing money.

"At the end of the discussion, Syed Saddiq did not agree with the suggestions proposed by the group members and decided to issue a statement saying that the money belonged to him and his parents," he said.

The first prosecution witness said this during re-examination by Deputy Public Prosecutors Datuk Wan Shaharuddin Wan Ladin and Muhammad Asyraf Mohamed Tahir on the first day of the trial of the Muar MP, who faces four charges of criminal breach of trust (CBT) and money laundering.

The witness also disagreed with lawyer Gobind Singh Deo who represented Syed Saddiq that the RM250,000 was from Syed Saddiq's parents to renovate the house.

Wan Shaharuddin: Why don't you agree?

Muhammad Taufik: I do not agree because there was also a discussion in the WhatsApp group that the money was from a discretionary fund that was previously applied for by Syed Saddiq.

Wan Shaharuddin: Your investigation into the loss of money at Syed Saddiq's house, is it related to the charge of withdrawing RM1mil?

Referring to the police report lodged by Syed Saddiq, the witness said the report stated that at 7.51pm on March 29, 2020, about RM250,000 in cash kept in a safe at his house had been stolen.

"There was no sign of it being forced open while the condition of his house was tidy and only certain people knew the combination," said the witness.

According to the first charge, Syed Saddiq is charged as the then Bersatu's youth wing or Armada chief – who was entrusted with control of Armada funds – of abetting Rafiq, Armada's assistant treasurer at the time, with CBT of RM1mil in funds belonging to the wing.

He is alleged to have committed the offence at CIMB Bank Berhad, Menara CIMB KL Sentral, Jalan Stesen Sentral 2, on March 6, 2020, and is charged under Section 406 of the Penal Code which provides imprisonment for up to 10 years with whipping, and is liable to a fine, if found guilty.

For the second charge, the accused is charged with misusing property for himself, namely RM120,000 from the Maybank Islamic Berhad account belonging to Armada Bumi Bersatu Enterprise by causing Rafiq to dispose of the money.

Syed Saddiq is accused of having committed the offence at Malayan Banking Berhad, Jalan Pandan 3/6A, Taman Pandan Jaya here between April 8 and 21, 2018, and charged under Section 403 of the Penal Code which carries a minimum jail term of six months and a maximum of five years with whipping, and is punishable by a fine, if convicted.

Syed Saddiq is accused of committing the offence at a bank in Jalan Persisiran Perling, Taman Perling, Johor Bahru, on June 16 and 19, 2018.

It provides a maximum imprisonment of 15 years and a fine of not less than five times the amount or the proceeds of illegal activities, upon conviction. 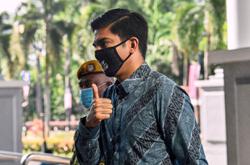