Nightmare for couple after neighbour starts renovating house in Mantin 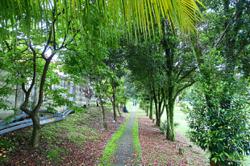 SEREMBAN: A couple thought they had found the perfect home to raise their four children when they moved into their new house in Taman Surian in Mantin near here from Kuala Lumpur four years ago.

Life for the 38-year-old who only wished to be known as Halim, his 44-year-old housewife Sabrina and children was bliss, until his neighbour decided to renovate his house.

"Several areas stated leaking whenever it rained," he claimed, adding that he lodged a police report on the matter.

He alleged that stones, nails and other construction debris also fell into his compound while work was ongoing next door.

"I am so thankful that my children were not playing in the porch area when this happened.

"But the incident did cause the rear-view mirror of my motorcycle to crack," he told reporters at a press conference at his house.

Abdul Halim said he lodged reports with the Seremban City Council (MBS) on several occasions but work did not stop.

The matter came to a boil on Sunday (June 5), when his neighbour allegedly threatened him while he was taking photographs and videos of the house to send to MBS.

His wife also claimed to have been affected emotionally since the renovation work started.

Seremban mayor Datuk Masri Razali said legal action would be taken against the owner for renovating his home without obtaining approval.

"The MBS issued notices to the owner to stop work and demolish the renovated structure on three occasions before.

"Since he did not do anything about it, we will now follow up with legal action," he said.

Masri said anyone planning to do renovation work must get approval to ensure all safety aspects are adhered to and to prevent any issues for others.

Nilai OCPD Supt Mohd Fazely Ab Rahman, in a statement, said the police were also probing a suspect under Section 427 of the Penal Code for committing mischief by damaging a car in the residential area.

"We received a police report on the matter on June 5 and we called both parties to have their statements recorded.

"The matter has been investigated and the paper has been forwarded to the state prosecution unit for further action," he said.

Offenders can be jailed between one and five years and fined or both upon conviction.

Nilai assemblyman J. Arulkumar, in a Facebook post reminded all house owners that they must get the approval from the local council before they can start renovation work.

"This is extremely important because we do not want any unnecessary problems later," he said.