PETALING JAYA: A former ambassador to Indonesia, who was arrested together with his son on allegations of cultivating cannabis in Janda Baik, Pahang, has been released.

Inspector An Afifa Baharudin had sought the remand, while the former diplomat was represented by Tan Sri Muhammad Shafee Abdullah and Rahmat Hazlan.

“The former ambassador was arrested on May 21, after which he was remanded for the first time for a period of seven days.

“The police sought to apply for a second remand for another seven days, but this was not granted by the magistrate after he was satisfied that there was no evidence to implicate him with any offences, among others,” said Muhammad Shafee yesterday.

Previously, the media reported that a former Malaysian diplomat had been arrested after being suspected of owning a cannabis farm with more than 100 trees at his home in Janda Baik.

The ex-diplomat was detained during a police raid on May 21, while his 53-year-old son was detained in Shah Alam on May 23.

According to Pahang police chief Comm Datuk Ramli Mohamed Yoosuf, the police confiscated 102 cannabis trees at his home with an estimated value of RM61,200, along with dried cannabis leaves weighing 1.02kg worth an estimated RM2,500 and a bottle of liquid made of cannabis extract worth RM250.

“We also believe that he acquired the ganja tree seeds from a block of ganja bought in Kuala Lumpur seven years ago,” he added.

Comm Ramli was also reported as saying that the case was considered the largest seizure of cannabis trees in the country. 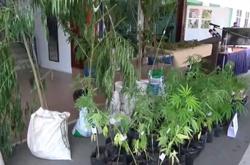