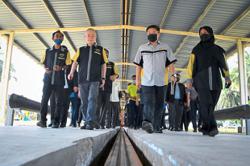 PETALING JAYA: A study is being done to determine if the Government should make it mandatory for all new motorcycles above 150cc to have anti-lock braking systems (ABS), says Datuk Seri Dr Wee Ka Siong.

He said the Transport Ministry and the Malaysian Institute of Road Safety Research (Miros) will conduct a detailed study on mandating the ABS technology, which is capable of reducing accidents and deaths involving motorcyclists up to 30%, according to Miros' studies.

"The same time period will be used to amend existing rules.

"When ABS is mandatory later, it is hoped that the level of motorcycle safety will be increased and further reduce the probability of deaths due to road accidents involving motorcycle users in Malaysia," said Dr Wee during the 10th anniversary celebration of the Miros Provisional Crase Crash Centre (PC3) in Melaka Tuesday (May 24).

Dr Wee added that the study will involve relevant stakeholders, including those from the motorcycle manufacturing industry as well as consumer representatives.

He also said according to accident data from the police and analysis by Miros, there were over 6,000 deaths in 2019 and over 60% of that involved motorcycles, which he described as "very worrying".

"Among the main factors of motorcycle accidents in Malaysia are the motorcycles skidding or failing to dodge while riding.

Dr Wee added that the ABS is one of the latest technologies used for motorcycle safety, especially with low engine capacity motorcycles which constitute the majority in Malaysia.

ABS technology is a technology which helps to stop the motorcycle from slipping, skidding and failing to dodge while braking.