GEORGE TOWN: A total of 21 people have had their statements recorded over the death of a junior doctor last month.

"Our investigation is almost complete, we need to complete a few things first before we submit it to the state deputy public prosecutor’s office,” he said.

ACP Soffian said the case remains classified as sudden death as no criminal element was found in the case.

He said once the investigation paper is completed, it will be sent to the state DPP office whether it needs an inquest or not.

He added that the post-mortem report of the deceased has also been completed. However, he declined to comment further as the investigation on the case has yet to be wrapped up.

State health department director Dr Ma’arof Sudin had in a statement confirmed that the deceased was a houseman who was posted to Hospital Penang on April 4.

Health Minister Khairy Jamaluddin had said that a special task force has been formed to look into the death of the houseman and allegations of a bullying culture in the medical fraternity.

The minister said he had received the initial report from the houseman's head of department, while police are also wrapping up their investigation.

The 25-year-old houseman reportedly fell from the 23rd floor of his rented residence at Jalan Datuk Keramat here on April 17. 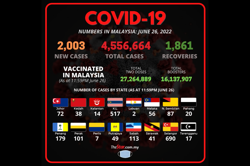