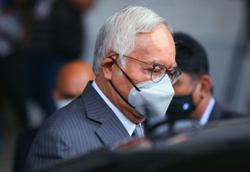 PUTRAJAYA: The Federal Court has allowed Datuk Seri Najib Razak and his son Datuk Mohd Nazifuddin to appeal the summary judgment entered against them over income tax payment, amounting to RM1.69bil and RM37.6mil respectively, to the Inland Revenue Board (LHDN).

Leave to appeal against an earlier Court of Appeal’s decision was granted following a unanimous decision by a three-member bench led by Chief Justice Tun Tengku Maimun Tuan Mat.

“It is our unanimous decision that the requirements of Section 96 (a) and (b) of the Courts of Judicature Act 1964 (CJA) have been met in terms of Enclosure 1 (motion for leave to appeal). Costs in the costs,” said Tengku Maimun who presided with Federal Court judges Datuk Nallini Pathmanathan and Datuk Mary Lim Thiam Suan.

Section 96 (a) and (b) of the CJA stated that leave would only be given by the Federal Court or Court of Appeal in any civil cause or matter involving a question of general principle decided for the first time or a question of importance upon which further argument and a decision of the Federal Court would be to public advantage or from any decision as to the effect of any provision of the Constitution including the validity of any written law relating to any such provision.

The former prime minister and his son are appealing against the summary judgment obtained by LHDN to recover more than RM1.7bil in tax arrears from them.

Two separate High Courts had allowed LHDN’s applications to enter summary judgment to recover tax arrears of RM1.69bil from Najib and RM37.6mil from Mohd Nazifuddin, for the period between 2011 and 2017.

A summary judgment is obtained when the court decides on a case through written submissions without a full trial and calling witnesses.

Both Najib and Mohd Nazifuddin lost their appeal in the Court of Appeal on Sept 9, 2021, to set aside the summary judgment.

The appellate court, however, granted the applications by both men to temporarily halt (interim stay) the summary judgment order pending the hearing of their leave to appeal application before the Federal Court.

In civil cases, litigants must first obtain leave before they can proceed with their appeals in the Federal Court.

Earlier, Tan Sri Muhammad Shafee Abdullah, who is representing Najib and Mohd Nazifuddin, submitted that LHDN’s conduct was in bad faith and it was clear the respondent (LHDN) had sought to bankrupt his clients even before the Special Commissioners of Income Tax (SCIT) could hear the merits of their defence to the additional tax assessments raised against them.LHDN was represented by its deputy solicitor Dr Hazlina Hussain while counsel Anand Raj from the Malaysian Bar acted as ‘amicus curiae’.

Lawyer Wee Yeong Kang, who is also acting for Najib and Mohd Nazifuddin, said they would file a notice of appeal as soon as possible. — Bernama