A file picture of climbers looking up at Mount Kinabalu. - Photo: ZULAZHAR SHEBLEE / The Star

RANAU: Tremors from the 3.7-magnitude earthquake which struck Kundasang, Sabah, at 9.28 am Tuesday (April 26), were not only felt by residents in the district, but also by climbers on Mount Kinabalu.

Mountain guide Joeythine Musin, 29, said he and a group of climbers were descending from the summit of the mountain when they felt the tremors for a few seconds.

Luckily, he said the earthquake was weak and the tremors were not followed by falling rocks.

"Yes, I was descending from the summit with several climbers and we felt the tremors, but there were no falling rocks,” he said when contacted through WhatsApp on Tuesday.

Meanwhile, the head of Panabalan substation at Kinabalu Park, Julaimin Kamin, said the situation at the Sayat-Sayat checkpoint and the Panabalan Complex at Mount Kinabalu was totally under control after the quake.

"There are 104 climbers scheduled to scale the mountain today and 110 others did that yesterday,” he said.

Bundle item seller Nordiana Zuhaidi, 34, said she was in her shop when she felt the tremors which lasted only a few seconds.

"It was so quick. I was shocked but not panicked as everything was fine,” she said.

According to the Sabah Fire and Rescue Department spokesman, no distress calls were received from villagers following the earthquake.

"Yes, the tremors were felt here, but no emergency calls were received. Nevertheless, residents and villagers are advised to be vigilant and to always take precautionary measures for their safety,” he added.

It was reported earlier that a weak earthquake, with a magnitude of 3.7 on the Richter scale occurred in Kundasang, Sabah, at 9.28am Tuesday.

According to a statement from the Malaysian Meteorological Department (MetMalaysia), the quake was detected 14km north-west of Ranau, Sabah, at a depth of 10km. - Bernama 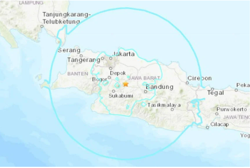