Boost for Silicon Valley of the East 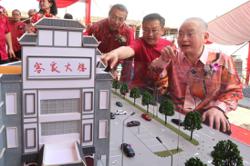 Masterplanning of Penang South Reclamation will prioritise bicycles and other green mobility devices to achieve a 70:30 modal share for trips that favour public transportation as opposed to private vehicles, which is an important component in the sustainability of a place.

CALIFORNIA-based Intel Corporation announced last month that it will invest RM30bil over 10 years to expand its manufacturing capabilities in advanced semiconductor packaging technology at the Bayan Lepas Free Industrial Zone of Penang.

In his maiden visit to Malaysia in December since assuming the top job, Intel chief executive Patrick Gelsinger said the addition of advanced packaging capabilities to Intel’s operations in Malaysia will strengthen its supporting activities and its global service centre, with the investment positioning Malaysia is one of the key hubs for manufacturing and shared service – creating 4,000 Intel jobs along the way.

Intel is one of the “Samurai 8” of Bayan Lepas – along with AMD, Hewlett-Packard, Clarion, National Semiconductor, Hitachi, Osram and Bosch – a moniker given to companies that believe in the strategic location next to the Penang International Airport.

In 1972, Intel made its maiden investment right here, kickstarting Malaysia’s first free trade zone – a move which undoubtedly encouraged others in the high-tech sector to follow suit.

Last October, the federal government’s Northern Corridor Implementation Agency (NCIA) jointly announced with Penang that it will promote high-tech industries in the state to develop a high-value talent ecosystem – chiefly through creation of new jobs in software and IR4.0 system engineering for high technology industries.

“This partnership between NCIA and Penang has given birth to a high-value talent ecosystem that will boost Penang’s position as a world class regional technology hub and reinforce the development of highly skilled local talent in various high-end technology related areas,” said NCIA in a statement. The Green Tech Park will be surrounded by a vibrant, campus-like environment.

“In collaboration with the Penang state and federal governments, NCIA is continuously enhancing Penang’s attractiveness to investors in the electronic and electrical (E&E) and the manufacturing and engineering (M&E) sectors as we continue to strengthen our position as a leader in the region for advanced technology, high value talent and technology hub,” said Penang Chief Minister Chow Kon Yeow.

Currently, there are more than 300 multinational companies with operations in Penang. As such, this Silicon Valley of the East continues to face pressures of making available suitable land for industrial expansion.

NCIA’s grand “single campus” concept will promote collaboration between key manufacturing areas in Penang, Kedah and Perak through the facilitation by NCER Technology Innovation Centre (NTIC), while positioning Penang as the catalyst hub focused on technology and innovation.

All these means there will be continuing demand for land on the island, especially that nearest to the Bayan Lepas FIZ, given the existing ecosystem for high-end E&E sector there.

The Bayan Lepas FIZ itself is almost 600 hectares, and there is no more land for any further expansion in any direction. Its proximity to the airport means buildings there are subject to height restrictions, thus preventing the construction of multistorey industrial parks that could work in other locations.

Given the overwhelming preference for industrial land on the island side, it is only natural for Penang to consider creating a greenfield right next to the Bayan Lepas tech ecosystem to not only quickly replicate what has been successful, but to also create a signature development that is compliant to environmental, social and governance (ESG) requirements of the modern global investment and industrial community.

At 930 hectares, the proposed Island A of the Penang South Islands (PSI) project holds the answer to the demanding requirements of the E&E sector, which often cites human resources as one of the challenges to overcome, be it attracting fresh talent or retaining existing workforce. The most important component of this masterplanned development is 283ha-industrial zone called the Green Tech Park.

In this regard, PSI represents the very aspiration of the state, going beyond certain national standards such as the Low Carbon City Framework’s 45% carbon reduction. With an allocation of 20% public green spaces (equivalent to about 160 hectares; current requirement is 15%), PSI will be a cut above all other typical developments.

For example, none can boast of a 140km bicycle network, meeting its promise of putting bicycle ahead of cars. This network is designed to achieve the 70:30 public-private transport modal share, with Penang’s ratio currently at 10:90 while the national target is 40:60.

All these plans will be executed and fall under the purview of a dedicated city management unit under the state government, dedicated towards maintenance and governance of the island to ensure everything will be top notch when it comes to maintenance and following through the vision for the place.

Island A will be an inviting environment for students from the educational and training institutes that are on the island or nearby as there will be room to create a lifestyle-centric campus-like environment surrounding the Green Tech Park, which is envisioned to house a holistic industry ecosystem surrounded by a pool of ready or emerging talents.

This synergy between talent and opportunities in cutting edge E&E research and development will be facilitated by the proximity between educational institutions, training facilities, innovation hubs, incubator labs and co-working places – all located within a stone’s throw from each other at a place known as the Heart of the Island, which will also be the social and business hub of Island A. The creation of another significant township on Penang island can help relieve pressure on other parts of the island, such as George Town, says Lim.Datuk Y.J. Lim, former president for the Asia Pacific region of Plexus Corporation, is of the view that there is a limit to how much green features can be retrofitted to existing developments.

“At some point, a greenfield development can offer much more room for the latest features to be incorporated, right from the ground up,” said Lim, 61, who has seen Bayan Lepas and the rest of Penang develop over the last 25 years.

Based in Bayan Lepas, Plexus Malaysia is involved in the complex product design, manufacturing, supply chain and aftermarket services, by partnering with companies around the world to transform concepts for the electronics manufacturing industry into branded products for the global market.

According to Lim, comparisons between Penang island versus the mainland cannot be avoided.

“Some are valid, such as the tendency to get better schools and medical institutions on the island. There are more amenities and getting from point A to B is shorter. Even the standards of the malls are higher, in terms of the kind of goods being sold. All these adds up,” he said, adding that it is already a fact that most tech workers prefer to live on the island.

“This is the case especially if the person doesn’t have any strong emotional connections with the mainland, or really needs to be stationed there. Yes, while the Batu Kawan area is designed correctly, it must work doubly hard to close the gap with the island.

“People expect Batu Kawan to be significantly better than Bayan Lepas as it has more land. After all, Bayan Lepas is already mature, with limited room for renovation.

“The authorities must put in more effort to make Batu Kawan better. Having Ikea alone is not enough as the place also needs good schools, parks, restaurants and so on,” said Lim, who argued that location matters a lot, whether for expatriates or otherwise.

“For example, it can take two hours or more on a Friday to get from Batu Kawan to Tanjung Tokong,” he said, adding that the state must ensure that Penang stays modern and competitive by improving infrastructure in a comprehensive manner, rather than in piecemeal fashion.

“Penang, being dependent on manufacturing, can and must do more. Everyone acknowledges there is land scarcity in Penang, so it is either opening more areas like Batu Kawan which is also already fully subscribed, or to expand the island.

“The three new islands from PSI will enable more investments to come into Penang, including for housing and worker accommodation. The creation of another significant township on the island side will help relieve pressure on other parts of the island, such as George Town,” said Lim who has been a board member of the Penang Strategic Investment Advisory Council since April 2019. The council is a public-private effort to advise the state on measures to develop Penang as a destination of choice for high-value investments. With an allocation of 20% public green spaces, Penang South Islands will be a cut above all other typical developments.

Just like New York’s financial district and Los Angeles’ Hollywood, each city must know its niche and play a role in complementing or nurturing the entire industrial landscape.

While Batu Kawan has a critical role in the larger scheme of things, the fact remains that it is industrial land next to Bayan Lepas that is more sought after, more than anywhere else in Penang, if not the whole country.

As the second smallest state in Malaysia after Perlis, Penang – with a total landmass of 105,000 hectares – is significantly smaller than Melaka (171,200 hectares).

Penang island itself is a very compact place, with only 29,300 hectares of land that has to be shared between agriculture, forest reserves, heritage areas, an international airport, transport terminals and housing, among many others. For context, Penang island is only 40% of Singapore’s size – another place that is heavily reliant on land reclamation to fuel its growth and prosperity.

“More countries are working hard to draw investments. Sometimes, people are stuck in their myopic views on what makes the country an investment destination. As far as the E&E industry is concerned, it is not even a competition between Penang and another Malaysian location. It is not Penang versus Johor Baru or Kulim or Melaka,” said Lim who has worked in high-tech manufacturing in many Asian countries.

When fully completed, PSI’s green setting, interactive and inspiring open spaces will rival the likes of Sophia Antipolis in France, Brainport Eindhoven in the Netherlands, and Singapore’s Jurong Innovation District.

As Europe’s first science and technology hub, Sophia Antipolis is a 2,400ha technology park that is home to 2,500 companies with a workforce of more than 38,000 people of 80 nationalities.

Located in a country where one-third of the land is below sea level, Brainport Eindhoven is an area where companies, governments and educational institutions work together to become a breeding ground for innovation and be the home base for leading-edge knowledge and research institutes.

Surrounded by lots of land reclaimed from swamps, the Jurong Innovation District is another good example of how industrial and technology cities understand that human capital is what makes a tech-based city successful – with talents automatically attracted to an outstanding built environment at the right location.

In view of this, Lim argued that the location and the surrounding environment of the investment matters a lot to multinationals and large corporations.

“Investors think in terms of Penang versus Ho Chi Minh City or other regional locations. The competition is with other countries, and investors weigh many factors, not just land cost alone. In terms of cutting-edge E&E research and development, having access to the right talent pool is very important. What then, are the things that attract or retain these talents?”