KUALA LUMPUR: The Sri Subramaniar Swamy Temple in Batu Caves has 'opened the door' for Hindus who did not have the opportunity to fulfil their vows to do so even though the Thaipusam celebration ended last Tuesday (Jan 18).

Speaking to Bernama, its Trustee, Datuk N. Sivakumar, said the temple was making all preparations for Hindu devotees to pay their vows, including bringing 'paal koodam' (milk pot offering) and 'kavadi' and shaving their hair as penance for answered prayers until Jan 30.

"Many were unable to fulfill their vows on Thaipusam day, so prayer ceremonies including kavadi, paal koodam and shaving are allowed from 5am to 10pm and the temple will probably operate longer if there are many devotees," he said.

He added that all prayer ceremonies in conjunction with Thaipusam would maintain the standard operating procedures (SOP) under Phase Four of the National Recovery Plan (PPN) and the public do not have to register online for any ceremonies.

Hindus celebrated Thaipusam on Jan 18 during 'Thai' which is the 10th month in the Tamil calendar, to commemorate the event of Lord Murugan receiving a sacred spear (‘Vel’) from his mother Goddess Parvati to vanquish the evil Soorapadman and restore prosperity and well-being of the people.

In conjunction with the festival, Hindus will fulfil their vows by upholding the ‘paal koodam’ which is considered the most sacred and the ‘kavadi’ (decorated metal frame held by silver spikes pierced into the body) by climbing the 272 steps of Batu Caves towards the Murugan temple inside the cave.

The government had set several SOPs for Thaipusam celebration this year (on Jan 19) including disallowing kavadi, limiting the number of devotees entering the temple grounds to 9,000 and prayer ceremonies of 18 sessions with a maximum of 500 per session.

Sivakumar said the temple, which was world-famed for having the largest statue of Lord Murugan with a height of 42.7 metres would also house around 70 to 80 stalls selling clothes, prayer utensils, food and drinks.

He asked those present to fulfil their vows to abide by all SOPs set to curb the spread of Covid-19.

Checks by Bernama at the temple found some Hindus bearing paal koodam and shaving their hair and contractors were seen busy setting up stalls in compliance with the SOP, but no kavadi was seen in the vicinity of the temple.

Earlier this month, the Sri Mariamman Devasthanam Kuala Lumpur Committee which manages the Batu Caves temple allowed the ceremony to bear kavadi since the new year before stopping it after the Gombak District Police Headquarters on Jan 9 issued a RM1,000 compound to the temple after devotees failed to comply with SOPs. - Bernama 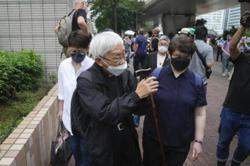