The Prime Minister said this was because of the perception that only states on the east coast of the peninsula would see floods due to the bad weather.

"The preparations to face the monsoon season were more focused on the east coast while there was the unusual flood in Selangor, which were unexpected by many," he said in his address in Parliament on Thursday (Jan 20).

Ismail Sabri said following the extraordinary and unexpected floods, the frantic situation on the first day of flood management in Selangor had caused rescue teams to struggle in conducting operations due to the complexity of urban flooding.

“In fact, the flood management in Selangor did not show any clear changes on the second and third day (of the floods), causing dissatisfaction among victims," he said.

Ismail Sabri also said that he had rushed to the National Disaster Control Centre (NDCC) on the night of Dec 18 for more information on the ground situation.

He then decided to activate an NDCC hotline for complaints and queries on the floods.

The Prime Minister said he also contacted the heads of the Armed Forces and other relevant agencies to mobilise personnel and assets for rescue operations.

“These floods exceeded the Selangor disaster department’s capability to respond. The state also rarely faces extraordinary floods like this,” he said. 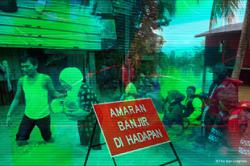