GEORGE TOWN: The Penang government plans to set up a Natural Disaster Management Unit as a precautionary measure in the event of any natural disasters caused by climate change.

Chief Minister Chow Kon Yeow said as a state that was constantly vulnerable to natural disasters, Penang needed to be prepared.

“We want to have concrete plans to ensure that Penang has the resilience to face natural disasters caused by climate change.

“We see that there is a need to set up this new unit as a precautionary measure not only in the face of disasters, but also to include a comprehensive process including planning and execution.

"We see the need to raise standards in the construction of drainage systems for new development projects so that it can accommodate the sharp increase in rainfall," he told reporters after witnessing the swearing-in of the Penang Island City councillors for 2022, at City Hall in the Esplanade, George Town.

Chow said it was vital to ensure the standard requirements of any drainage construction for new projects are met so that it will be able to accommodate the rain water during a downpour.

“We hope that through the Natural Disaster Management Unit, the issues faced due to natural disasters can be managed in a comprehensive manner.

“This unit will not only be in action during a natural disaster but they will be part of the planning team for early intervention with regards to the climate change," he said. 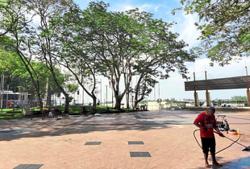