He said the families were evacuated beginning 11pm Friday (Dec 31) after their houses were inundated with water.

"The flood started in two areas, Kampung Sermin and Kampung Lembah Bakti, where 55 people from 13 families have been moved to the community halls in their villages.

"The numbers continued to rise and, as of 8am today (Jan 1), we had 456 victims from 133 families in eight villages affected by the floods," he said in a statement Saturday.

He added that a total of nine flood relief shelters have been opened, with the highest number of victims coming from Kampung Tenang, where there were 233 victims from 73 families.

Meanwhile, two rivers in Johor - Sungai Muar near Kampung Awat and the Sungai Tangkak near Kampung Seri Makmur - have risen to a dangerous level.

"The current reading of Sungai Muar is 20.01m while the danger level reading is 19.95m.

"As for Sungai Tangkak, the current reading is 4.1m, which is over the danger level of 4m," he said.

The Malaysian Meteorological Department (MetMalaysia) had also issued a warning of continuous rain in Pontian, Kulai, and Johor Baru at 6.30am Saturday.

Floods: Number of evacuees in Johor rises to 658 at noon Saturday (Jan 1)

Floods: Johor latest state to be hit, more people evacuated in four others 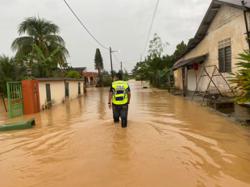