Floods: Number of evacuees continues to increase in Terengganu KUALA LUMPUR: The number of flood evacuees in Terengganu continued to increase while Kelantan, Pahang and Selangor recorded a decline as of noon Friday (Dec 31).

In TERENGGANU, a total of 390 people from 115 families are currently taking shelter at two relief centres (PPS) in the Dungun district, compared with 388 people this morning.

"The rescue team is still monitoring the situation. There is a possibility that the residents in Kampung Minda and Kampung Kuala Jengai need to be evacuated due to the continuous heavy rain,” he said.

According to the Department of Irrigation and Drainage (DID) official Info Banjir portal, three stations namely Sungai Besut at Keruak Bridge; Sungai Dungun in Kampung Pasir Raja, Dungun; and Sungai Nerus in Kampung Langkap, Setiu were reported to be above the warning level.

In KELANTAN, the number of flood victims dropped to 1,172 people from 367 families at mid-day today, compared with 1,399 people from 412 families this morning.

According to the Social Welfare Department (JKM) Info Bencana application, the number of PPS also rose to 18 from 14 this morning, namely 10 in Kuala Krai; Jeli (seven); and Tanah Merah (one).

Only one major river was reported to be at the danger level, namely Sungai Kelantan in Kampung Temangan, Machang with a reading of 19.92m.

In addition, the Public Works Department (JKR) disaster management portal reported that Jalan Kuala Balah, Jeli connecting the district with Dabong has been closed to all vehicles.

In PAHANG, JKM Info Bencana reported that a total of 2,366 evacuees were still at 32 PPS compared with 2,704 people this morning.

The relief centres with the most number of evacuees were in Pekan followed by Temerloh, Kuantan, Bentong and Maran.

Meanwhile, DID official portal reported that two rivers were at the warning level and increasing, namely Sungai Tembeling in Kampung Merting, Jerantut; and Sungai Luit in Kampung Subuh, Maran.

In SELANGOR, a total of 408 people from 125 families were still at four PPS as of noon today, a slight decrease from 466 people from 132 families this morning.

Selangor police informed that three roads were still closed to traffic as of 10am today, namely FT 31 Dengkil-Banting bridge and Jalan Genting Peras-Kuala Klawang due to floodwaters apart from the damaged bridge heading to Subang Shooting Range.

Floods: Terengganu hit again, number of evacuees in Kelantan up

DID: Forecast of floods in Kelantan, Terengganu on Thursday (Dec 30) night 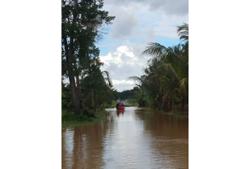