'Long Tiger' caught in Kedah, another arrested for aiding the fugitive

It is learnt that the 32-year-old suspect, Abdul Hamim Ab Hamid was arrested in a special operation carried out by the police on Tuesday (Dec 28) in Sungai Petani, Kedah.

A picture of Abdul Hamim, who was shirtless and only wearing a white short, being held by several plain-clothes policemen has since went viral on social media.

It is also learnt that police arrested another man in his 40’s at the scene who was believed to have assisted Abdul Hamim in his escape from Johor to Kedah.

Police are still tracking down several other individuals, believed to have also aided "Long Tiger" after his escape.

"It is true, he was detained in Kedah.

Outgoing Johor police chief Comm Ayob Khan will be holding a special press conference to inform about the suspect’s arrest on Wednesday (Dec 28).

On Dec 15, Abdul Hamim escaped through the main entrance of the Tangkak courthouse at around 11.55am before his hearing.

He was picked up from the Sungai Udang Prison in Melaka a day before the incident and brought to attend the court session for a case under Section 388 of the Penal Code (for extortion).

The police personnel who were ushering Abdul Hamim, who was handcuffed, to court only realised that he was trying to escape after noticing him running out of the door towards the gate.

Four police personnel and the court security guards chased the suspect but he managed to run towards the woods.

The suspect also has an ongoing hearing at the Muar Session’s Court for rape under Section 376 of the Code. 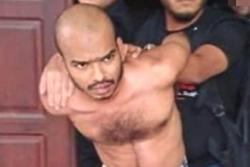