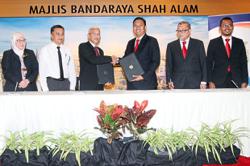 KLANG: The massive floods in Shah Alam and Klang appears to have caught authorities by surprise, with many Malaysians lamenting the lack of immediate aid provided to victims.

Taman Sri Muda in Shah Alam was the worst hit with floodwaters rising as high as the roofs of single-storey houses and entering right up to the staircases of double-storey homes.

In Klang, some of the areas submerged had not seen flooding for more than 40 years.

The nasty turn of events became nastier when several people died due to the floods in Selangor.

Selangor Mentri Besar Datuk Seri Amirudin Shari has announced that the remains of 17 people had been discovered in the state so far.

Some of those who lost their lives were the elderly and at least one known death was that of a senior citizen living alone.

What irked the people most was the absence of the Armed Forces as well as Malaysian Civil Defence Force rescue teams when floods hit both localities on Friday (Dec 17).

Chitra Venugopal, 40, narrated how her family and relatives comprising 24 people, including a five-month-old baby, were trapped in her parents’ home at Taman Sri Muda when the floods started and were without much food and water until their rescue on Monday (Dec 20).

“Our neighbour gave us hot water for the baby’s milk and some food as well, but we had nothing towards the end of our ordeal,’’ said Chitra, adding only civilians were going around in lightweight boats trying to help flood victims.

She added that volunteers worked very hard despite struggling to deliver food in their small boats.

Association for the Protection of the Natural Heritage of Malaysia (Peka) president Puan Sri Shariffa Sabrina Syed Akil said government help did not arrive immediately due to too much bureaucracy.

“The authorities acted very late because there is too much red tape, for example, even to release one car, so many people need to sign for it.

“Unless the order comes from a minister or the top leadership, government officials will not dare make their own decisions,’’ said Shariffa Sabrina.

She added bureaucracy and red tape should be done away with during times of crisis and disaster so that the military and other civil uniformed bodies could be mobilised automatically to carry out relief work.

In this case, said Shariffa Sabrina, the Defence Ministry must explain to the people why it was late in mobilising and sending the troops to ground zero.

“It’s the people’s tax money that is used to buy sophisticated equipment for the military, so why not use them to help when the people are in trouble?’’ asked Shariffa Sabrina.

“Help should have been sent immediately with the military being mobilised immediately.

“The authorities must now explain to the people why there was a delay,’’ said Tan.

Shah Alam MP Khalid Samad said the poor response from the government, when the floods happened, was highly questionable.

He said civil society groups and volunteers were suffering on the ground trying to reach out to the trapped people with limited resources.

Khalid added it was very difficult when he and his team went to Taman Sri Muda to deliver food and try to rescue people.

“There were cars stalled all over the place making movement very difficult.

“The military could have come in and used helicopters to assist transferring the people,’’ he said.

Klang MP Charles Santiago said both the Selangor state government and the Federal Government were caught by surprise when the floods hit.

“They just did not know how to tackle it,’’ added Santiago.

He added that the National Disaster Management Agency (Nadma) should have been better prepared because the Meteorological Department had predicted heavy showers some time ago.

“That is the whole point of having an agency such as Nadma.

“They were aware that Selangor was in trouble and they did not even issue a public alert?’’ said Santiago.

He added had the people been warned, they would have taken the necessary measures to sit out the floods.

Malaysian Centre for Constitutionalism and Human Rights director Fahri Azzat said those in authority appeared to have been too distracted to listen to the plight of the people on the ground during the disaster.

He added people were trapped in a flood that could have been avoided if the relevant leaders and government agencies had understood the various phenomena accurately.

“They don’t understand anything about global warming,’’ said Fahri.

Lawyer and activist Nizam Bashir Abdul Kariem Bashir said the onus was now on both the federal and state governments to draw up a proper emergency flood management response, inform and educate the people of the plans and then execute and implement them.

“These plans may include things like immediate food, income and shelter relief as well as search and rescue measures,’’ he said.

Prime Minister Datuk Seri Ismail Sabri Yaakob had admitted at a press conference in Jelebu, Negri Sembilan on Tuesday (Dec 21) that there were weaknesses on the part of the government in managing the floods in Selangor.

Floods: Army on the ground from day one; 12 boats, 300 soldiers deployed in Shah Alam

Floods: PM admits to 'weaknesses' that led to delay in rescue efforts in Selangor

Once in 100 years flooding? It has become too frequent

Mydin boss forgives those who broke into Sri Muda store