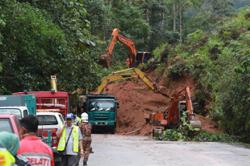 IPOH: The search operation at the landslide incident site on KM27 of Jalan Simpang Pulai-Blue Valley has ended.

Perak Fire and Rescue Department acting operations director Muhamad Shahrizal Aris said the operation has been called off after the canine unit did not detect anything after two attempts to find other victims who may be buried during the incident.

He said the control post was officially closed at about 5.45pm on Friday (Dec 3).

Muhamad Shahrizal had earlier on Friday said that the operation would be called off should the tracker dogs not find any potential victims.

The landslide occurred at about 1.40pm on Thursday (Dec 2), burying a lorry and a multi-purpose vehicle (MPV).

Two bodies have been retrieved.

Jalan Simpang Pulai-Blue Valley has been closed off to motorists following the incident.

Debris clearing works will now commence, with the road expected to be reopened on Dec 9. 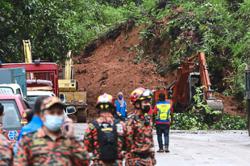