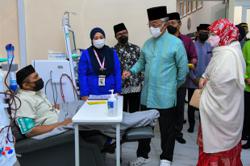 TEMERLOH: Yang di-Pertuan Agong Al-Sultan Abdullah Ri'ayatuddin Al-Mustafa Billah Shah has decreed that stilt-house design be made an example for future construction of houses near a river.

He said raising houses on stilts was also one of the safety measures for the residents in the event of flooding or river overflowing.

"It (stilt houses) will be safer for the residents in the event of floods.

"So, any construction of houses near the Pahang river, for example, should take into account the height (of flood-level estimates) and should be an example to other houses along the riverbanks.”

Sultan Abdullah also spent some time mingling with the recipient of the YASA house, Siti Rokiah Zainal Abidin, 51, and advised her to take good care of the property.

The King also checked the interior of the fully-furnished house, which measures 960 sq ft and has three bedrooms and three bathrooms, before leaving to visit two other recipients in Kampung Pangsenam and Kampung Tanjung Pasir.

Meanwhile, Siti Rokiah, who has been living in Kampung Lompat with her mother Ramlah Hitam, 81, for the past 50 years, said they did not expect to receive such a gift from YASA after their house was badly damaged by floods early this year.

"My mother is the happiest person today as she never thought, at this age, she would receive a gift of a very comfortable house.

"Thank you Your Majesty for this gift,” said the mother of two. - Bernama Body of woman found at Sg Kandis waste trap
Efforts to restore BN in power not due to court cases, but trust given by the people, says Ahmad Zahid
Malaysia to align its strategic plans for non-communicable diseases with WHO's implementation road map
Zizie Izette eligible to receive RM2.8mil as introduction fee, says witness
Kuamut rep Masiung says no plans to join Peter Anthony's new party
Woman loses over RM30,000 to fake cryptocurrency investment scheme
Strong winds blow off roofs at varsity complex, supermarket in Shah Alam
Muhyiddin: Perikatan in final stages of determining seats to contest in Johor polls
Draft on Parliament transformation to be submitted to cabinet before March
Businessman loses over RM500,000 in scam