KUALA LUMPUR: A five-year-old boy died after he is believed to have fallen from the 16th floor of a condominium unit in Batu Caves, Gombak, here.

The victim's aunt, Fauziah Hanum Cik Ros, 36, said she was showering when the incident occurred at about 10.30am on Wednesday (Nov 17).

"Once I had finished showering, I realised that he was not around. I then called Bella (the victim's mother) who was out at that time," she told reporters at the scene here.

Fauziah said the victim's mother, in her 20s, told her to look for her child in every room, especially near the windows.

The victim was known to be an active child who loved to climb on windows.

Meanwhile, Selangor Criminal Investigation Department (CID) chief SAC Nik Ezanee Mohd Faisal said preliminary investigations indicated that the victim was believed to have been playing and climbed onto a bed by the window.

He said the victim was being taken care of by his aunt when the incident happened, and the police believed he fell out of the window.

"The window did not have a grill and further investigations are ongoing,” he said when contacted.

Nik Ezanee said the case is being investigated under Section 33 of the Child Act 2001 for leaving a child without reasonable supervision.- Bernama 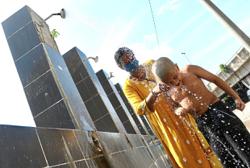