Budget 2022: All TV stations to provide sign language interpreters for the news

KUALA LUMPUR (Bernama): All television networks, including those in the private sector, will provide sign language interpreters in their news segments to improve access of people with disabilities to the media.

This will be done with the help of the Malaysian National News Agency, Bernama.

Finance Minister Tengku Datuk Seri Zafrul Tengku Abdul Aziz said in tabling Budget 2022 in Parliament on Friday (Oct 29) that the initiative would enable those with hearing disabilities to keep up with the latest news and information.

"Probably not many people know Tan Lee Bee, Khairunnisa Kho Abdullah, Wan Zuraidah Abu and Goh Soo Leng, who serve as the sign language interpreters we often see in the corner of the television screen," he said when presenting the Budget themed "Keluarga Malaysia, Makmur Sejahtera” (A Prosperous Malaysian Family).

At the beginning of this year, 24-hour news channel Bernama TV became the second television broadcaster in the country to use the service of a sign language interpreter for its news segments.

From Jan 4, its news broadcast has featured a sign language interpreter.

Bernama TV also became the first broadcasting station in the country to use the services of a sign language interpreter for its sports news. – Bernama

Budget 2022: RM25mil will be provided to help children who were made orphans by Covid-19 pandemic

Budget 2022: Reactions from the banking sector

Budget 2022: A must for listed companies to have a least one female board member

Water, power and roads in Sabah and Sarawak a priority under Budget 2022, says Mahdzir 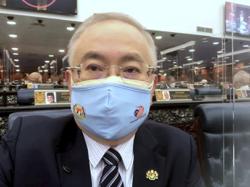