KUALA LUMPUR: Transport Minister Datuk Seri Dr Wee Ka Siong and Communications and Multimedia Minister Tan Sri Annuar Musa did not mislead the Dewan Rakyat over the national cabotage policy and the duo also did not contradict each other, says the Dewan Rakyat Speaker.

Datuk Azhar Azizan Harun (pic) was responding to Lim Guan Eng (PH-Bagan) and Steven Sim (PH-Bukit Mertajam) in a letter dated Oct 22, after the two DAP MPs had raised a motion under Standing Order 36(12) that deals with MPs misleading the House.

Azhar’s letter was made available to the media on Tuesday (Oct 26) afternoon.

Azhar said that after he received the letter from Lim and Sim on Oct 11, he had requested for an explanation from Dr Wee and Annuar.

Azhar said he then scrutinised the Hansard regarding the debate on Sept 30 in Parliament as well as Annuar's parliamentary written reply over the issue.

"I found that the Transport Minister and also the Communications and Multimedia Minister did not issue any statements that misled the House under Standing Order 36(12) when they were answering the questions," Azhar wrote in the letter.

Standing Order 36(12) states that "Any member who imputes statements that misled the House is deemed to be in contempt of the House and the member may be referred to the Committee of Privileges for the offence."

Azhar said the gist of Dr Wee's explanation on Sept 30 was that the national cabotage policy only applied to repair works and not cable installation works at seabeds.

"The Communications and Multimedia Minister, meanwhile, in his answer, explained that Malaysia isn't listed under the project due to the company's decision and that the national cabotage policy is not completed. The cabotage policy was only decided by the Cabinet on Oct 8."

"Therefore, I found both statements neither contradictory nor misleading."

Azhar also said when Lim and Sim raised about potential losses of between RM12bil and RM15bil due to the national cabotage policy, the duo had merely stated an estimation.

"The Transport Minister had chosen to disagree with it and gave his opinion about the matter.

"Therefore, for those reasons, I chose to reject your (Lim and Sim) motion," he added.

On Sept 30 during a debate with Dr Wee in Parliament, Lim claimed that the national cabotage policy could cost Malaysia RM12bil to RM15bil losses in foreign investment, as he cited a news report that the Apricot project by Facebook and Google would bypass Malaysia entirely.

In response, Dr Wee explained that Malaysia was skipped in the Apricot project due to the rising tensions in the United States and China trade war in 2015.

Dr Wee also said that Malaysia wasn't left out of any regional undersea cable projects, as it was presently part of the MIST (Malaysia, India, Singapore, Thailand) project, an 8,000km subsea cable system that is due to be completed in the fourth quarter of 2022.

Dr Wee said MIST will eventually be connected with the Apricot project.

Dr Wee and Lim are scheduled to cross swords on Nov 2 and two local broadcasters - TV3 and Astro Awani - had stated that they were ready to collaborate to broadcast the live debate on the national cabotage policy.

Meanwhile, Annuar, in a written reply on Oct 5, had explained that countries chosen to participate in the Apricot Internet subsea cable was the decision of Facebook and Google.

Annuar had said Malaysia was not listed as one of the countries involved in the Apricot project because the cabotage policy exemption had yet to be resolved. 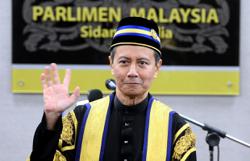