PUTRAJAYA: A total of 46 new Covid-19 fatalities were recorded on Sunday (Oct 24), bringing the cumulative death toll to 28,400.

Of the number, 12 deaths were classified as “brought-in-dead” and 16 of the 46 came from both Kedah and Sarawak, which reported eight deaths in each state.

According to the Health Ministry's CovidNow website, zero deaths were recorded in Melaka, Pahang, Kuala Lumpur, Perlis, Labuan and Putrajaya on Sunday.

The number of active cases currently stands at 75,947 cases, with 77.9% or 59,129 are patients with mild infections and are undergoing home quarantine.

Another 10,274 or 13.5% patients are those under isolation at low-risk quarantine centres (PKRC) while the number of those being hospitalised are 5,941 or 7.8%.

There are currently 603 patients in intensive care units (ICU).

The national ICU utilisation is currently at 60.3%, with Sarawak and Kelantan the highest at 76.2% and 75.3% respectively. 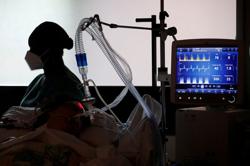 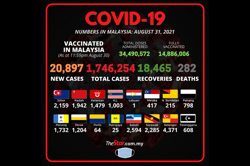