IPOH: A Health Ministry staff member was injured after the vehicle he was driving skidded off the road at Jalan Jelapang - Taman Meru Perdana on Wednesday (Oct 20).

According to Perak Fire and Safety spokesman, the 42-year-old man was found stuck in the four-wheel drive by other road users at 7.29am.

"Thanks to the help of folks who found him, they were able to pull him out of the vehicle before our arrival.

"We believe the driver was heading to his office at Raja Permaisuri Bainun Hospital (HRPB) from his home in Chemor," he said, adding that the accident didn't involve any other vehicles.

He added that the driver received early treatment at the scene before he was rushed to HRPB for further medical help. 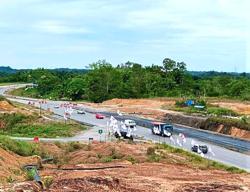