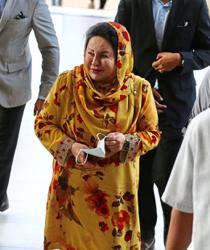 KUALA LUMPUR: Datin Seri Rosmah Mansor has been made a scapegoat despite other parties being involved in purported graft in relation to a solar hybrid project for rural schools in Sarawak, claims her lawyer.

Datuk Akberdin Abdul Kader said there were parties in the administration, particularly in the Education Ministry at the time, who conspired with Jepak Holdings, the company from which Rosmah was alleged to have solicited a bribe.

The lawyer, who was giving his opening statement on the first day of the defence trial at the High Court here on Tuesday (Oct 5), said his client was merely the wife of then prime minister Datuk Seri Najib Razak, with no executive powers in government.

"It is very unreasonable and unfounded to link the accused to the three charges," he said.

Akberdin said there were parties that "name-dropped" Rosmah for their own political or personal interests.

The lawyer pointed the finger at Rosmah's personal aide, Datuk Rizal Mansor, as being the "mastermind" in the case.

"Rizal is the person responsible, who solicited and received the monies mentioned in the charges," Akberdin added.

He said Rizal, who was initially charged together with Rosmah but later acquitted, had "cut a deal" with the prosecution where he had to be the crown witness and give false testimony against his client to trap and implicate Rosmah on the three charges.

"If the witness (Rizal) did not cooperate, the prosecution would have continued to proffer new charges against him.

"This showed that the prosecution has mala fide (bad intention) against the accused even when the charges are baseless," he added.

The bribes were allegedly received through Rizal as a reward for helping Jepak Holdings secure the Hybrid Photovoltaic Solar System Integrated Project as well as the maintenance and operation of diesel generator sets for 369 Sarawak rural schools worth RM1.25bil from the Education Ministry through direct negotiation.

Rosmah is alleged to have committed the offences at Lygon Cafe, Sunway Putra Mall, Jalan Putra here; at her residence in Jalan Langgak Duta, Taman Duta; and at Seri Perdana, Persiaran Seri Perdana, Precinct 10, Putrajaya; between January 2016 and September 2017.

The charges, under Section 16(a)(A) of the Malaysian Anti-Corruption Commission (MACC) Act, provide for imprisonment of up to 20 years and a fine of up to five times the amount of the gratification or RM10,000, whichever is higher, upon conviction.

The hearing continues before Justice Mohamed Zaini Mazlan this afternoon.