KUALA LUMPUR: The RM400bil 12th Malaysia Plan (12MP) unveiled in Parliament is aimed at steering the nation towards sustainable growth and inclusive prosperity for the rakyat in the post-Covid-19 period.

“Let us put aside all differences in the spirit of Keluarga Malaysia (the Malaysian Family) and work together to build a Malaysia that is competitive and resilient, including being able to face challenges,” said Prime Minister Datuk Seri Ismail Sabri Yaakob.

“Let us gather all our strengths, expertise and existing experiences from both sides of the divide to realise the objectives of the 12MP,” he added when tabling the plan in the Dewan Rakyat yesterday.

Ismail Sabri said the Covid-19 crisis had united the nation, resulting in an opportunity to initiate transformation.

He cited the recent memorandum of understanding between the government and Pakatan Harapan Opposition lawmakers as an example where both sides had agreed to work together for reforms and stability. It is an unprecedented collaboration.

“It is my hope that this understanding will allow us to focus on efforts to fight the pandemic and put the nation on a foundation of stronger growth,” he added.

The “A Prosperous, Inclusive, Sustainable Malaysia” theme for the five-year (2021-2025) plan focuses on nine key areas. Among these are social welfare and the protection of workers and the rakyat, particularly the needs of the bottom 40% (B40) group.

Other areas include bridging the development gap between states, particularly through digitalisation and the use of advanced technology.

The transport and logistics infrastructure has also been earmarked for development over the next five years, as well as “green growth” for the implementation of low-carbon, clean and resilient development. 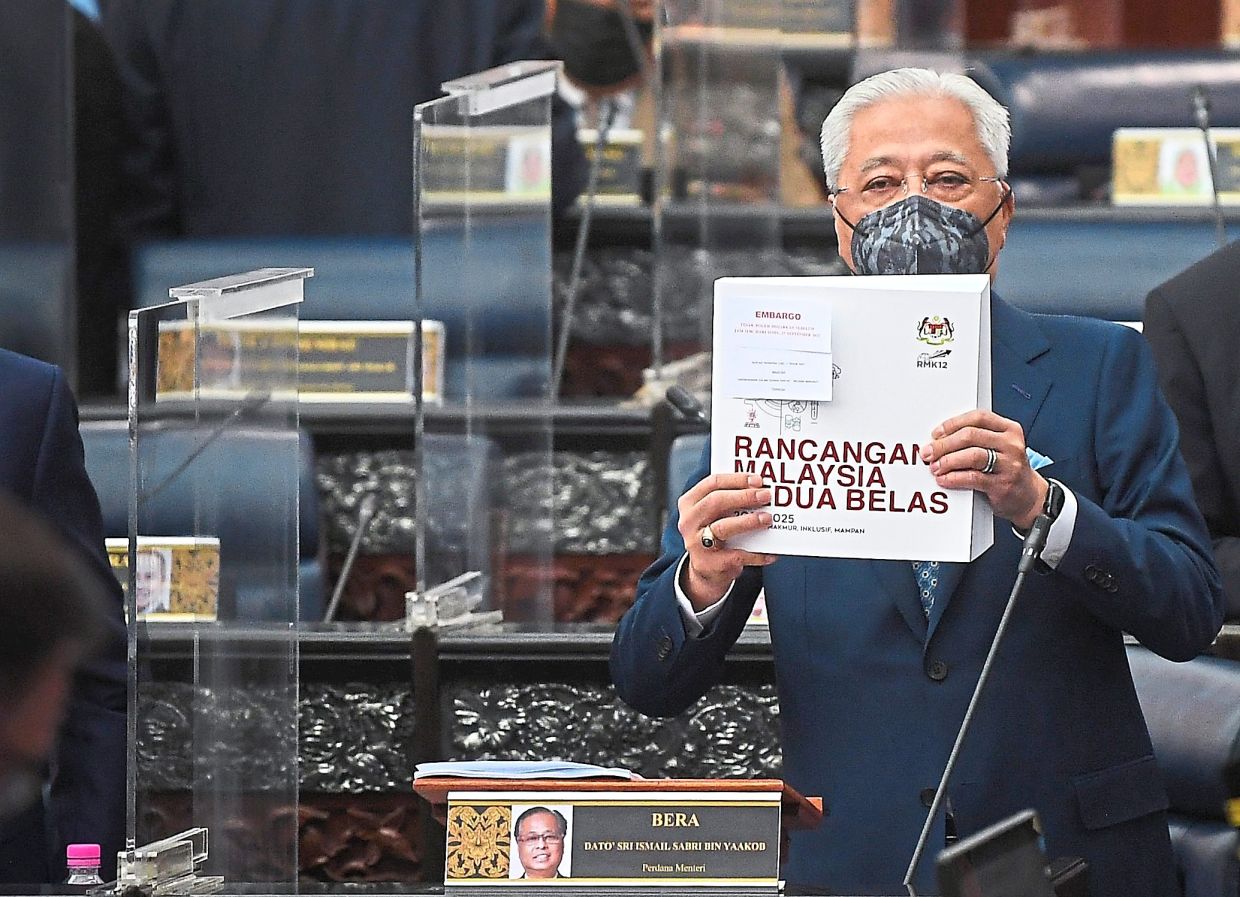 On the table: Ismail Sabri holding up the 12th Malaysia Plan during the Parliament session in Kuala Lumpur. — Bernama

Additionally, the 12MP outlines initiatives to strengthen the public sector delivery system, including the adoption of “whole-of-government” and “whole-of-nation” approaches.

In his speech, Ismail Sabri acknowledged that the nation’s economy and the government’s development expenditure under the previous five-year plan were drastically affected by the pandemic.

“Owing to the enormous need to protect lives and livelihoods in 2020 and 2021, room for the implementation of development projects were limited. This is expected to continue till next year.

“As such, the RM400bil development allocation will be more focused on the continuation of projects and implementation of new ones,” he added.

On a positive note, he said the eight economic aid and stimulus packages implemented since March last year had stabilised the economy.“The national gross domestic product (GDP) has expanded by 16.1% in the second quarter of 2021 after having shrunk for the last four quarters,” he added.

He also noted that at least 50% of the development expenditure would be allocated to the six least-developed states: Sabah, Sarawak, Kelantan, Terengganu, Kedah and Perlis to ensure more balanced growth and development gaps.

“Most of the allocations would be channeled to improve connectivity and to provide better access to basic infrastructure, amenities and services,” he added.

Ismail Sabri also stressed on the digitisation of the economy, which is expected to contribute 25.5% to the GDP by 2025.

“Under the 12MP, efforts will focus on providing an enabling environment for the growth of the digital economy, strengthening the provision of digital infrastructure and services, developing future-ready digital talent, as well as positioning Malaysia as the Asean digital centre,” he said.

The 12MP will also introduce initiatives for sustainable and green development, including reducing the nation’s carbon footprint.

On the Malaysian Family concept under the 12MP, Ismail Sabri said the government was committed to strengthening the bumiputra agenda while providing just, equitable and inclusive socioeconomic development for all the rakyat.

“We want to live happily together as a family regardless of income level, religion, race or ethnicity.”

The tabling of the 12MP was postponed on at least two occasions from the original Aug 6 date last year due to the pandemic and the change in the political landscape.

Ministers will begin replies on issues raised during debates between Oct 5 and 7.