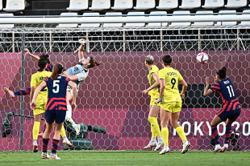 IPOH: While A. Kandiah was known as an athlete who rose to fame for running barefoot and winning three Bronze medals during the 1977 KL SEA Games, he was also adored by many, especially his family members.

Kandiah’s daughter-in-law, S. Puspalatha, 37, said her late father-in-law was a family man who was loved and cared for by everyone who knew him.

“He was a sportsman, therefore he was disciplined, but that didn't stop him from expressing his love for everyone.

"As a family man, he often checked on us and we talked about family matters whenever we could.

“Even if you were just friends or only met him a couple of times, it would be impossible to speak ill of him. He was indeed a great, loving and caring man,” she told The Star.

Puspalatha said the family was still in shock and it would take them a long time to accept Kandiah’s passing.

“We lived quite close by, within five minutes' walk, so we would visit him every day. We often shared meals and talked about everything.

“I have never met a man as great as him. We miss him terribly and it is hard for us to accept this.

“We are unsure how the rumour started, but he didn’t pass away because of Covid-19. My father-in-law had long suffered from pneumonia and heart problems,” she said.

On Sept 15, about a week before Kandiah’s passing, his daugher Shanti, a former sprinter at district level, passed away due to suspected Covid-19.

When contacted, Panther Athletic Club president K. Jayabalan said he felt sad to have lost a friend he knew for over 40 years.

“I remember when we first met, Kandiah won the Bukit Kledang 5km hill run and he was in his mid-20s.

“He started his journey as a runner when he was 27, which was considered quite late, so he had to work harder to prove himself and that was what set him apart from others.

“He was determined and focused on his goals. Even after he retired, he never lost his passion for sports and that was how we founded the Panther Athletic Club together," he said.

Jayabalan said Kandiah coached several athletes under the club but later decided to focus on his construction business.

“Even though he wasn’t a coach anymore, he continued to actively participate in the club’s events. He was a gem in the industry and losing him is heartbreaking,” he added.

Jayabalan added that the club is planning to commemorate Kandiah’s achievements.