PUTRAJAYA: A Malaysian Governance Index will be introduced to measure the country’s performance in that area.

According to the 12th Malaysia Plan (12MP), the index will also emphasise good governance among public institutions.

“These efforts will enhance public perception of the government, thus improving Malaysia’s ranking in the Corruption Perceptions Index (CPI),” read the 12MP report that was tabled in Parliament on Monday (Sept 27) by Prime Minister Datuk Seri Ismail Sabri Yaakob.

It mentioned that adoption of an anti-bribery management system standard, aimed at reducing the risk of bribery and building trust among stakeholders, will also be intensified.

This standard would enhance compliance with internationally recognised standards and best practices against corruption.

“Moreover, in promoting integrity and to safeguard sovereignty of the country, civil servants are required to strictly uphold confidentiality in handling sensitive documents and disseminating information as well as honour the pledge under the Official Secrets Act,” the 12MP report added.

12MP: Half of growth expenditure to be allocated to six least-developed states 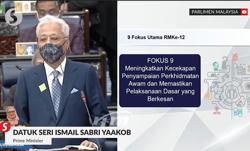