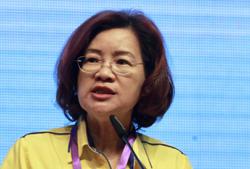 Making a stand: Heng stressing a point during the Wanita MCA AGM at Wisma MCA in Kuala Lumpur.

PETALING JAYA: Wanita MCA has objected to the proposal of an anti-propagation law and any attempt to restrict the freedom of religion of non-Muslims, damage social contracts and violate the Federal Constitution.

“Malaysia is a multiracial country and the Federal Constitution clearly provides for the freedom of religion for all,” said Wanita MCA chief Datuk Heng Seai Kie.

She said the MCA “strongly criticises” the recent announcement by Deputy Minister in the Prime Minister’s Department (Religious Affairs) Ahmad Marzuk Shaary on the matter.

“We would also like to remind Ahmad Marzuk that he has overstepped his power when attempting to interfere in non-Muslim affairs, which is under the Unity Ministry.

“As a deputy minister, he should work for the well-being of all the people and not confine himself to party agenda and narrow-mindedness, which is clearly against the spirit of the Malaysian Family,” Heng said at the launch of a Malaysia Day celebration and Wanita MCA annual general meeting for all states, conducted virtually this year.

A total of 4,377 delegates from 11 states took part in the online AGM.

Heng was commenting on a statement by Ahmad Marzuk, who earlier said the government planned to draft four new syariah laws, including the Control on the Propagation of Non-Muslim Religions Bill.

She said Ahmad Marzuk’s remarks were contradictory to the Sept 7 comments by Minister in the Prime Minister’s Department (Parliament and Law) Datuk Seri Dr Wan Junaidi Tuanku Jaafar who said that the plan for new syariah laws was not raised in Cabinet because matters involving religion were under the jurisdiction of the states.

“It is disappointing that the government had stated that it will appeal against the ruling. Wanita MCA will join forces with other women’s organisations to fight this,” she said.

Heng noted that more than 150 countries allowed equal rights to men and women in passing on their citizenship to their children.

“Malaysia is one of the 25 countries that have not done so,” she said.

“This contradicts the Convention on the Elimination of All Forms of Discrimination Against Women (Cedaw) that Malaysia signed in 1995, and violates Article 8(2) of the Federal Constitution on equal rights between the sexes.”

She said the court judgment was a decision that complied with Cedaw and the Federal Constitution.

“We hope the government and all parties support this decision to prove Malaysia’s sincerity in implementing equal rights for both men and women,” she added.

With Malaysia having gone through much politically with “three premiership changes in three years”, Heng said it was high time for all political leaders to set aside their differences and work for the people.

“Let’s unite to fight the Covid-19 pandemic as well as put the needs of the people first.

“We also call on all elected representatives to go down to the field and deliver diligently and responsibly.

“Focus on each constituency and utilise the allocation from the Federal Government to serve and help solve the people’s problems,” she said.

Wanita MCA, she said, was also supportive of the House of Representative Recall Bill to deter party-hopping.