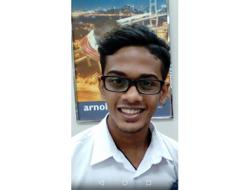 GEORGE TOWN: The High Court here was told that T. Nhaveen had his foot run over by one of the accused, a year before he was beaten to death.

The key witness in the trial, T. Previin, 23, said the incident took place one evening five years ago when he, Nhaveen and another friend were chatting while seated outside the porch of Previin's home in Bukit Gelugor.

Previin said two of the accused in Nhaveen's murder, who were riding a motorcycle, deliberately rode over Nhaveen’s foot while they were seated at the porch.

He said another friend who was next to him pushed the motorcycle wheel back in the nick of time, as Nhaveen shrieked in pain.

He said the motorcycle was ridden by J. Ragesuthan, the first accused, with the fourth accused, a juvenile, riding pillion.

Previin then went on to identify them in the dock during an examination-in-chief by deputy public prosecutors Khairul Anuar Abdul Halim and Mohd Amril Johari.

Previin said in the incident, Ragesuthan had called Nhaveen a “pottai” (Tamil slang for effeminate) and threatened to beat him up, but left since "another friend was with them".

He then illustrated how the incident took place using a die-cast model and whiteboard marker and later showed the court their seating positions outside his home on Jalan Bunga Raya through a Google StreetView image.

Asked if there were any other bullying incidents after that, Previin said there were none.

Earlier, he told prosecutors of how he first met Ragesuthan when he went to the Bukit Jambul complex to watch a movie.

"While getting off the escalator, Ragesuthan smacked my groin.

“Since then, whenever they (Ragesuthen and the other accused) saw Nhaveen and me, they would bully us.

"They would stop Nhaveen in his tracks and take him elsewhere,” he said on his second day on the stand as a key witness to the case.

Previin was allegedly beaten up together with Nhaveen in 2017 and is one of the witnesses in the murder case.

The accused, Ragesuthen and S. Gokulan, then both 18, along with two others, one aged 17 and another who turned 18 in July 2017, are charged with murdering Nhaveen between 11pm and midnight on June 9, 2017, near a learning centre in Jalan Kaki Bukit, Bukit Gelugor.

They are jointly charged under Section 302 of the Penal Code, which carries the mandatory death sentence upon conviction.

The four also face another charge at the Sessions Court for allegedly causing grievous hurt to Previin at the same time and place.

Lawyer Sukhindarpal Singh held a watching brief on behalf of the Bar Council.

The trial came to a halt after defence lawyer Maanveer Singh raised a concern over new Covid-19 clusters near his firm at King Street and fellow defence lawyer Yagoo was required to go for a swab test.

In asking for an adjournment, Maanveer Singh said the cases in Penang had exceeded 1,000 a day.

Judicial commissioner Mohd Radzi Abdul Hamid then set the trial to convene from Oct 4 to 8, to allow the prosecutors to continue with their examination-in-chief of Previin.

Previin then told JC Mohd Radzi that he had received a death threat from a person known to the accused.

"They said after they (the accused) come out, they will kill me,” he said after being advised by prosecutors to not make such statements in court.

JC Mohd Radzi said the court takes a serious view on harassment of witnesses, and urged the prosecutors and Previin to lodge a police report over the matter.

He then told Previin to take up the police’s offer of protective custody, which he declined when previously offered in May this year.

The prosecution had previously told the court on May 4 that they have received reports of certain people harassing key witnesses, causing the court to sharply warn those individuals not to do so, or face a police investigation.

Police have arrested three men in a criminal intimidation probe following Previin’s complaint of harassment in late May.