All set for walk-ins: Signboards to guide those without appointments for vaccination have been put up at the IDCC PPV in Shah Alam. — RAJA FAISAL HISHAN/The Star

Malaysians aged 40 and above and locals with comorbidities can get their jabs at any of the PPV involved (see graphics) until Wednesday.

From Aug 5-22, the walk-in exercise will be expanded to all Malaysians aged above 18 in the Klang Valley.

Foreigners are also divided into the two categories and can get their jabs from Aug 9-11 and Aug 12-22.

Universiti Putra Malaysia medical epidemiologist Assoc Prof Dr Malina Osman suggested that those involved check ahead to find out if the PPV was congested. “I also hope that each PPV will post their status live on all social media platforms to update on their capacity there from time to time,” she said when contacted.

The government has stated that the walk-ins are only for Klang Valley residents. Individuals who already have appointments are not allowed.

They are also not allowed to cancel their appointments to opt for the walk-in. The walk-in exercise is part of the government’s effort to vaccinate 80% of the population.

Dr Malina said the walk-in initiative would be helpful to those unable or facing technical glitches in registering through the MySejahtera app, the undecided and those who have registered but still awaiting news. 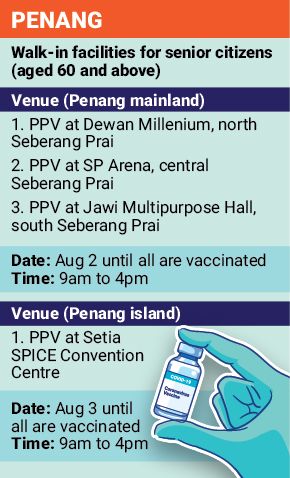 With foreigners and undocumented migrants also eligible for the walk-in jabs, Universiti Malaysia Sarawak’s (Unimas) head of politics and government studies programme Dr Linda A. Lumayag said: “There is no way we can exclude non-citizens in our struggle to mitigate infections.”

The senior lecturer, who conducts research on migration issues, urged the government to consider introducing mobile vaccination for the undocumented migrants and to use a vaccination card instead, and also to get pro-migrant NGOs and religious bodies involved.

She encouraged undocumented workers who have taken their jabs to convince their friends to come out and do so too.

On Saturday, Immigration director-general Datuk Khairul Dzaimee Daud gave an assurance that the department would not interfere in the vaccination programme for migrants nor station officers near the PPV.

National Covid-19 Immunisation Programme coordinating minister Khairy Jamaluddin had said that the walk-in exercise would be expanded to other states soon, with priority given to senior citizens.

Khairy had said that the matter would be announced from time to time depending on vaccine supply in the country.

In Penang, the Setia SPICE Convention Centre will also carry out a walk-in initiative today to cater to senior citizens who have not received their jabs yet.