PUTRAJAYA: The Health Ministry has reported 219 deaths due to Covid-19 on Monday (August 2), a new daily record.

The previous record was 207, reported a week ago on July 26.

In his daily Covid-19 statement, Health director-general Tan Sri Dr Noor Hisham Abdullah said of the 219 fatalities, 201 were Malaysians while 18 were foreign nationals.

There were 105 deaths in Selangor alone.

Kedah and Perak each had six deaths each while Kelantan and Terengganu both had four.

Sabah reported three fatalities, while Labuan and Perlis had one each.

At least 176 casualties had some form of comorbidity.

Currently, 1,063 patients are in intensive care units (ICU) nationwide, with 532 on ventilator support.

About 54% of the country's 15,764 cases are those detected from tracing of close contacts.

Another 32% are sporadic infections, while 12% are linked to clusters. 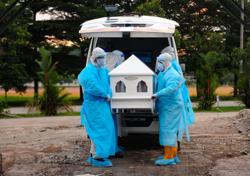