INTERJECTIONS and shouts for the Prime Minister to answer questions made it difficult for Datuk Seri Tengku Zafrul Tengku Abdul Aziz (pic) to get a word in edgewise while replying to queries on measures in the National Recovery Plan (NRP).

The Finance Minister, who is NRP coordinating minister, tried to answer queries from the Opposition but had a hard time finishing his sentences as the MPs stood up to ask him more questions.

They also demanded that Tan Sri Muhyiddin Yassin should be the one answering their questions but the Prime Minister had left Parliament before the special sitting continued in the afternoon.

Tengku Zafrul managed to deliver points on measures to alleviate the situation faced by government contract doctors when he said that those affected would have their contracts extended by another two years.

“This extension will cost the government about RM1.2bil,” he told the House.

His reply was not well received by the Opposition, calling it a half-baked solution, although Tengku Zafrul argued that the extension would allow the government to come up with a more holistic solution.

He also had difficulty getting a word in about infections that stemmed from factories but had a little help from former deputy international trade and industries minister Ong Kian Ming (PH-Bangi).

Ong said the government should look at factory clusters more closely to determine the actual source – the factory buildings itself or the workers’ accommodation.

On suggestion from Syed Saddiq Syed Abdul Rahman (IND-Muar) that windfall tax be imposed on companies that made huge profits during the pandemic, Tengku Zafrul said the matter must be considered carefully as it might spook investors.

“A sudden decision to impose windfall tax could also scare investors into bringing their investments elsewhere.

“It could threaten investor confidence and if they choose to explore other countries, we could lose out on big future investments,” he said.

Currently, the windfall tax is being imposed on the palm oil industry based on monthly crude palm oil prices.

Speaker: No decision on limiting number of MPs 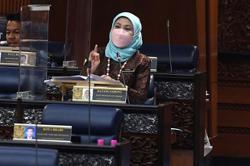