GEORGE TOWN (Bernama): A senior citizen narrowly escaped death when a 50-year-old durian tree near his house was uprooted during strong winds in Kampung Gertak Sanggul, Bayan Lepas, near here on Saturday (July 10).

Tan Liang Sin, 63, was in the kitchen when the tree fell, injuring him on the body and hands while his wife and daughter, who were in the living room, escaped unhurt.

Bayan Lepas state assemblyman Azrul Mahathir Aziz said the incident occurred at 2.15pm when strong winds caused the tree to fall on the store of the house located near the kitchen.

"Following the incident, the victim was hit by pieces of debris and suffered cuts and scratches on his body and hands. He was treated at home,” he said when contacted today.

He added that the store and kitchen were badly damaged.

"We helped the victim put up a canvas over the damaged parts to keep out the rain as a temporary measure before works to repair the damage and build a new roof are undertaken.

He said the Fire and Rescue Department took more than two hours to cut and remove the durian tree. - Bernama 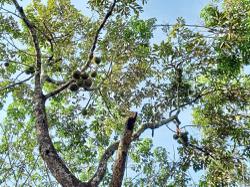