The Bera MP and Defence Minister was elevated from his Senior Minister (Security) post.

Both Ismail Sabri and Hishammuddin are seen as part of the Umno faction that wants to remain with the Perikaan Nasional government.

At around 8.30pm, the Umno supreme council members are expected to vote whether the party wants to withdraw from the ruling coalition, headed by Prime Minister Tan Sri Muhyiddin Yassin, the Bersatu president.

Universiti Teknologi Malaysia (UTM) political analyst Dr Mazlan Ali believed that the appointment of the two Umno leaders was a compromise by the Prime Minister so that the party would not pull the plug.

But, Mazlan does not think that most of the Umno supreme council members would consider that the Deputy Prime Minister post was relevant.

"If it were relevant, they would have taken the post a long time ago," he said.

He predicted that tonight's supreme council meeting would be hotly debated. He said some members, including Ismail Sabri, would try to convince most of them to stay with the Perikatan government.

"Zahid has admitted that it was him talking in a phone recording with PKR president Datuk Seri Anwar Ibrahim. By doing so, he is firm about leaving the PN government to form a 'jajaran baru' (new alignment) with PKR," he said.

Political analyst and SIP Advisory CEO Jason Leong said the double Umno promotions were a good development for Umno as a political party.

"There is no reason for Umno to quit the PN Government now as otherwise, the Umno leaders, especially those non-MPs or court-implicated MPs in the supreme council, would look very selfish," he said.

Leong argued that the development paved the return of much clout to the grand old party and augured well for Umno.

"They should take this opportunity to close ranks and remain united to fight to win bigger political battles ahead," he said.

Umno’s Isham Jalil, who is anti-Bersatu, cautioned that if the Umno supreme council accepted the DPM offer from Muhyddin, there would not be much change in the political situation.

“Umno will continue to bow to Bersatu, which has created internal problems for Umno, resulting in it being divided,” he said.

Dr Bridget Welsh, editor "The End of Umno? Essay's On Malaysia's Dominant Party", noted that there were no new faces in the Cabinet promotions.

"It does not build needed confidence for the government," she said.

Welsh said it was a risky move for Ismail Sabri and Hishammuddin as it could potentially remove them from Umno leadership.

"It depends on how the split goes," she said. 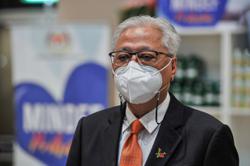