GEORGE TOWN: Police here have arrested 21 individuals in a raid on an illegal gambling den at a Gat Lebuh Maccalum shophouse on Monday (June 21).

George Town OCPD Asst Comm Soffian Santong said the suspects, aged between 30 and 64, were detained by a team of police from the district police headquarters D7 unit during the 5.30pm raid.

"Upon inspection, we also seized RM4,000 in cash that is believed to be used for gambling," he said in a statement.

ACP Soffian said twenty of the suspects were found to have prior records for criminal and drug offences.

He said the compound notices were issued in accordance with Regulation 10 (1) of the Prevention and Control of Infectious Disease Regulations 2021, and added that all suspects will be remanded for two days until Wednesday (June 23) at the Bayan Baru Central Lockup.

ACP Soffian also said the premises electrical supply was cut with the assistance of Tenaga Nasional Berhad personnel on Tuesday (June 22) at 10am under Section 21(A) of the Common Gaming Houses Act 1953 (Act 289 amendment 2001) to ensure that the activities do not resume. 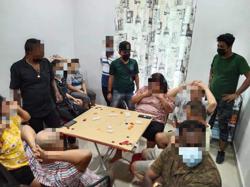