Senior Minister (Security) Datuk Seri Ismail Sabri Yaakob said among the offences committed were not observing physical distancing (152), not wearing face masks (137), failure to register before entering premises (135), carrying too many passengers in vehicles (54), not complying with movement restrictions (70) as well as 232 other offences.

"Under Ops Benteng we 984 roadblocks were set up. Five foreigners were arrested with one vehicle seized during these operations," he said in a statement on Sunday (June 13).

Meanwhile, the EMCO at Jalan Klias 2 and 3, Beaufort and Kg Kuala Menggatal, Kota Kinabalu in Sabah will end one day ahead of schedule.

Ismail Sabri said the EMCO at the two locations were initially supposed to end on June 15.

"Meanwhile, at Bandar Darulaman and Lubuk Kawah, 167 positive cases were detected," he said, adding that the Health Ministry confirmed that active cases were decreasing there while the clusters were also under control. 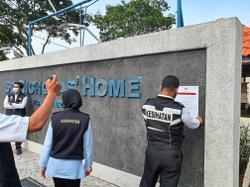