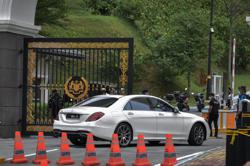 Dr Mahathir, who was in a grey Proton X70 with a police escort, did not stop to take questions from the media as authorities had disallowed impromptu press conferences due to the current lockdown.

However, Dr Mahathir is set to address the media in a press conference via teleconferencing app Zoom at 4.30pm on Thursday.

Earlier, he arrived at 1.59pm at Istana Negara for his scheduled audience with the King. The meeting is believed to be about the current political landscape and the Covid-19 pandemic.

It is also understood that after Dr Mahathir, the King is set to grant an audience with Parti Warisan Sabah (Warisan) president Datuk Seri Shafie Apdal later at 4.30pm.

Umno president Datuk Seri Zahid Hamidi, is set to have an audience with the King on Friday (June 11) morning.

The King had scheduled audiences with several political leaders starting on Wednesday (June 9).

After meeting with political leaders, the King will hold another special meeting with the Malay Rulers on Wednesday (June 16).