PETALING JAYA: The ongoing Emergency proclamation and the ordinances are actions taken under and according to the Federal Constitution, says Speaker Datuk Azhar Azizan Harun.

He noted that the move was backed and substantiated by valid and enforceable legal principles spelt out in the Federal Constitution.

“Whether we like it or not, that is the power of the Cabinet or Executive and that power has been exercised.“It is therefore imperative for us to embrace the Federal Constitution in its entirety and not pick and choose the application of any of its provisions as and only when it suits us, ” he said in an article he penned in news portal MalaysiaNow.

He said critics of the ongoing Emergency were being selective in their defence of the Constitution to gain political mileage.

Azhar also said they appeared not to comprehend the concept of the division of powers between the three main institutions in the administration of the country.

“We shouldn’t blow hot and cold and accept whatever actions when they benefit us or our aspirations or desires, only to shout and scream when those actions don’t serve our interests, ” he wrote yesterday.

Azhar wrote that he had to issue an explanation on the matter.

He noted that the Constitution divides the power between the Executive (prime minister and Cabinet), Parliament and the Judiciary to ensure the smooth running of the country.

“This is so that each institution knows its powers and the limit of its powers. This is called the division of powers.

“Each institution is therefore expected to exercise its respective powers independently and without any interference from the other institutions. This is known as the doctrine of separation of powers, ” he wrote.

He explained that while the doctrine of separation of powers was never followed exactly in any country, he pointed out that the division of powers was a legal principle that must be applied.

“That is why the courts cannot entertain any questions as to the validity of any proceedings of the Dewan Rakyat. In other words, in this situation, the courts do not have any source of law to do so, ” he said.Azhar said it was normal for the three institutions of the administration to intersect in each other’s domain.

He also said the arguments that the government had no right to stop parliamentary proceedings should be debated based on constitutional provisions. 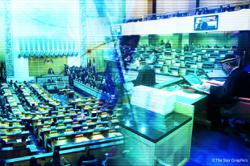