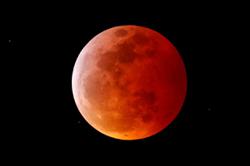 The Super Flower Blood Moon observed from the banks of Sungai Kuching in Sarawak earlier Wednesday (May 26). - Bernama pic

KUALA LUMPUR (Bernama): Although the movement control order is in effect, Malaysians, especially astronomy enthusiasts, did not miss out on viewing a rare natural phenomenon known as the Super Flower Blood Moon lunar eclipse Wedneday (May 26) night.

This time around, many watched it live on the National Planetarium’s Facebook and YouTube channels as the telescope facilities at the Planetarium here are closed due to the MCO.

He said the lunar eclipse known as the "Super Flower Blood Moon" was actually three phenomena happening simultaneously with the Super Moon because the moon looks slightly bigger, about 7% bigger than regular full moons, as it is closest to the Earth.

He said the Flower Moon happens during summer in the northern hemisphere while the Blood Moon is named after the reddish tinge of the moon, which makes it seem as if it is bleeding.

"The full moon phenomenon causes the moon to look reddish for around 15 minutes during the lunar eclipse that occured from 7.11pm to 7.26pm Wednesday.

"However, the Super Moon and Flower Moon can be seen throughout the night till dawn, ” he said during the live telecast.

Due to heavy rain and thick clouds in Kuala Lumpur, the blood moon phenomenon that ended at 7.26pm could not be seen in the skies above the capital.

The eclipse occurs several hours after the moon is at its perigee, when the sun, earth and moon are all lined up in a row and the entire moon crosses the umbra.

Meanwhile, the Federal Territory Islamic Religious Affairs Department said on its website that an eclipse prayer and sermon would be conducted following the standard operating procedure (SOP) at all mosques and suraus in Kuala Lumpur after Maghrib prayers. - Bernama 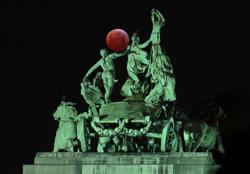 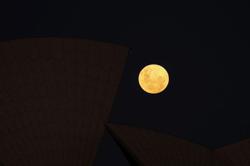