Some rush to stock up, others stay cool

Crowd control: Shoppers waiting for their turn to enter a supermarket in Ipoh.

Even before the announcement placing Ipoh and other districts in the state under a 14-day enhanced MCO came on Thursday evening, there were already queues at several major supermarkets and hypermarkets here.

Photographs of long lines of shoppers made their rounds on social media.

Teacher Ambiga Pillay, 60, said there was no need for panic buying and it was not worth the risk going to a crowded place.

“Since only my husband and I are at home, we don’t really need to get a lot of things. And when we do need anything, we can always go to the sundry shops nearby.

“I am sure there are enough essential items for everyone... there’s no need to panic and start hoarding, ” she said.

Lee Yan Di, 30, a music teacher, concurred, saying that “for my family, there will be no panic buying”.

Commenting on the online photos of people waiting at the entrance of shopping centres and hypermarkets, she said: “I don’t understand why people still do that after going through several MCOs since last year. We are still allowed to go out to buy groceries so there is definitely no need to stock up.”

Supervisor T. Roshene Malar, 41, said her aged parents, who live in Batu Gajah, panicked after learning about the enhanced MCO.

They were concerned about going out to buy essential items with potential long queues.

“I had to calm them and told them I will help them buy whatever is required for at least two weeks.

“I live in Ipoh, and will need to take half-day leave to sort out matters for my parents, ” she said.

In a statement, Domestic Trade and Consumer Affairs Ministry’s state director Saifullizan Kamarul Zaman said necessities were sufficient and available in the market during the enhanced MCO period.

“In view of panic buying that started on Thursday at retail outlets, I would like to inform everyone that public markets, supermarkets and other retail outlets are operating according to the hours set by the government.

“Therefore, consumers are advised not to make panic purchases but plan them based on actual needs, ” he said.

He also encouraged traders to exercise self-control by determining the appropriate quantity and sale limit for individuals or families in ensuring that the supply of basic consumer goods was sufficient at all times.

“We will conduct daily monitoring and inspections at retail premises.

“Traders are also warned not to take advantage of the situation by raising the prices of goods, displaying misleading prices and hiding controlled items, ” he said.

Zaini Shaari, who sells chicken at the Ipoh central market, said it was crowded between 6am and 9am yesterday.

“It was definitely more crowded compared to the last few days.

“Business has been good before the Hari Raya celebrations until today but I think it will slow down from Saturday, ” he said.

Fishmonger Jasni Jamal, 52, said her stock was almost sold out before 9am.

“Most are favourites like sardines, mackerel, prawns and squid, ” she said.

She assured customers that there would be supplies even during the enhanced MCO period. 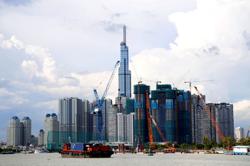