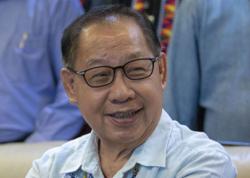 KOTA KINABALU: Parti Bersatu Sabah’s (PBS) willingness to work with the opposition, including Parti Warisan Sabah, will benefit Sabah STAR, it was pointed out.

Sabah STAR secretary-general Datuk Guandee Kohoi said PBS president Datuk Seri Dr Maximus Ongkili’s announcement that the party would consider working with Warisan if it shared the same aspirations as PBS was a desperate move to compete with STAR.

He said it was ironic that PBS seemed to be making enemies within the Gabungan Rakyat Sabah (GRS) coalition while stating its preparedness to work with opposition parties.

“This is making supporters wonder what Ongkili’s true intentions are, ” Kohoi said, adding that the move could mark the end of PBS’ original political aim, which was to strive for Sabah’s rights and autonomy without interference from peninsula-based parties.

He said instead of working harmoniously with Sabah STAR, PBS had again made statements suggesting that it wanted to challenge and compete with Sabah STAR.

However, Kohoi said Sabah STAR welcomed Ongkili’s stance as it made more supporters frustrated and disappointed with PBS.

This is not the first time that the two Kadazandusun-based parties have come out with statements challenging each other and appearing to engage in political one-upmanship to gain a stronger foothold in the Kadazandusun and Murut areas.

The “cold war” is believed to have sparked off when Sabah STAR took in PBS strongman Stephen Teo and made him a Sabah STAR division chief for the Sepanggar parliamentary constituency.

Observers said a clear sign of PBS’ displeasure was when Ongkili stated that Tambunan was the birthplace of PBS and the party would reorganise the three divisions – Tambunan, Bingkor and Liawan – under the Keningau parliamentary constituency.

For many, it was a signal to Sabah STAR’s Datuk Seri Dr Jeffrey Kitingan, who is the Tambunan assemblyman and Keningau MP, that PBS could be gunning for the two seats which were once held by his elder brother, former PBS president Tan Sri Joseph Pairin Kitingan.

Kohoi said PBS’ action now was a clear sign that it was aiming for the Tambunan and Keningau seats.