KOTA KINABALU: A Sandakan photographer’s Facebook post offering to "spend time with your elderly during Raya" was an instant hit, despite it being a joke.

His post, which includes a package of checking in on the parents, throwback moments by looking at old photo albums and banter about marriage, has been re-shared more than 3,100 times, with some being community pages.

The post was also accompanied by made-up screen grabs of conversations with two different potential clients, where he offered the services for free to a single woman but charged the one who was not available.

Mohammad Farid Md Ariffin, 28, came up with the idea for the funny content late last month after realising that many people may not be able to return to their hometowns when travel restrictions were imposed.

He wanted to put a light touch to the situation, knowing how most people have been frustrated about not being able to spend the festive season with their loved ones.

But the lad said it was not the first time a Facebook post of his had garnered a huge reaction, as he experienced something similar last year, but on a more serious matter.

“Last year, I helped to highlight the plight of a runner and a cookie business owner who was scammed by a customer for not turning up and paying for her orders, ” he said, without going into details.

In a recent post, Mohammad Farid said his friends know him to be playful, but he did receive some responses from Internet users about the services being offered.

“But I believe they knew it was a joke, and were just trying to show appreciation for my funny post, ” he said, adding that he will continue to post funny things on Facebook to entertain people. Screen grab of the viral post by Mohammad Farid Md Ariffin, where he joked about offering services to accompany parents for those who could not make it home for Hari Raya. 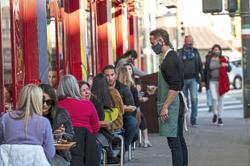