“At 119 to 120 nautical miles northeast of Kuala Terengganu, three of these enforcement vessels surrounded the KM Gemia detention boat and asked that the three fishing boats be released.

the matter, ” he said in a statement yesterday.

He said the swift action of the MMEA personnel resulted in the Vietnamese enforcement teams leaving Terengganu waters and the fishermen were arrested for trespassing as well as stealing sea produce.

All 19 on board the three boats, including the skippers, were aged between 21 and 61 and they did not have any valid documents. Also seized were about 1.5 tonnes of their catch, an estimated 4,500 litres of diesel and fishing equipment.

“All the detainees and seizures were escorted to the Terengganu MMEA jetty for further investigation. The MMEA took 55 hours to bring them back to the jetty as two of the boats were damaged and had to be towed, ” he added.

Since Ops Kuda Laut was launched last June, 87 foreign fishing boats as well as 960 crew members have been detained for encroaching into Malaysian waters and stealing sea produce. — Bernama 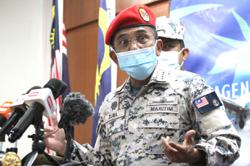