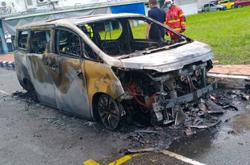 IPOH: A man was seriously injured while four others escaped with light injuries when the car they were travelling in skidded and caught fire near Taiping.

Taiping OCPD Asst Comm Osman Mamat said the incident occurred on Tuesday (April 20) at about 9pm at KM88.6 of the Ipoh-Butterworth road.

All the victims are aged between 12 and 44 years old.

“The 44-year-old driver of the car heading to Kamunting tried to avoid a car in front that suddenly pressed on its brakes.

“The car swerved to the right before it spun a few times and came to a stop on the side of the road. It then caught fire moments later, ” he added

All the victims have been sent to the Taiping hospital to receive treatment.