PUTRAJAYA: The month-long maximum price scheme for Hari Raya Aidilfitri has kicked off with enforcement officers stationed at locations such as supermarkets and wet markets to monitor compliance among traders.

Domestic Trade and Consumer Affairs Minister Datuk Seri Alexander Nanta Linggi (pic) said that checks were already carried out on the first day of the scheme on Wednesday (April 21), where 2,073 premises were checked.

He said the ministry’s enforcement team had also received two complaints, adding that monitoring is made to ensure ceiling prices of goods in the price control list were followed, as well as the use of price tags and pink plates for goods under the scheme.

"There are also some traders in remote and rural areas who did not abide by the scheme, where they claim that they did not know that the price control scheme has been implemented. In such cases, we have warned them to comply, ” he said.

Alexander said that aside from wet markets, pasar tani and supermarkets, the enforcement teams will also check on the pricing situation at hypermarkets, supermarkets, mini markets and grocery stores nationwide.

Beginning Wednesday until May 20,12 food items from the four main categories of beef, chicken, eggs and seafood will be put under price control.

The minister said the maximum price as per manufacturers, wholesalers and retailers that were determined is according to current cost and price trends,

Alexander warned that traders who up their prices indiscriminately will be have action taken under the Price Control and Anti-Profiteering Act.

Individuals found guilty under the Act can be fined up to RM100,000 or be jailed not more than three years or both or be compounded up to RM50,000.

"Our enforcement teams will be present at public places to monitor the situation. This is to protect consumers from excessive profiteering by unethical traders during festive season, ” said the minister. 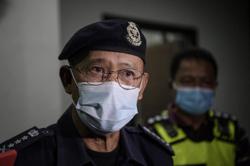