KUALA LUMPUR: Dang Wangi police have refuted claims that they gave preferential treatment to the suspects involved in the assault of two bodyguards for fasting.

Dang Wangi OCPD Asst Comm Mohamad Zainal Abdullah said this after the suspect apologised for his actions before being handed over to the South Klang police.

"Many reporters were at the Dang Wangi police headquarters following a press conference over the Hari Raya-themed online gambling video on Saturday (April 17).

"The suspect was coincidentally being brought through the lobby to be handed over to the South Klang police and noticed them and started talking. The suspect did not give a press conference," he said in a statement on Sunday (April 18).

ACP Mohd Zainal said the reporters there did not pose any questions to the suspect when he began apologising in Mandarin.

"We urge all parties to not manipulate this issue," he said.

The employer who allegedly assaulted his two bodyguards for fasting had apologised for his actions.

“If what I said to my bodyguards offended anyone, I think I should apologise to all Muslims in the country, the Yang di-Pertuan Agong and my two former bodyguards, ” he said in Mandarin outside the Dang Wangi police station on Saturday.

He was speaking to reporters outside the station yesterday before being taken away in a police car.

On Wednesday (April 14), the police received a report about the employer, who was said to be upset that his two bodyguards were fasting during Ramadan.

The complainant - a 26-year-old bodyguard - told the police that the incident occurred at a condominium in Jalan Pinang.

He claimed that he and a colleague were slapped after telling the employer that they were fasting when he asked them.

The complainant said they then followed the employer to his house in Batu Nilam, Klang, where they were allegedly beaten, threatened and insulted.

He claimed a gun was also pointed at one of them. 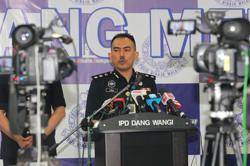