KLANG: Five men, including the man who assaulted his two bodyguards for fasting, have been arrested as they are believed to be involved in illegal gambling and loan sharking activities.

“We seized several items, including mobile phones, a pistol as well as five bullets and a rotan.

“Initial investigations revealed that the suspects have been involved in illegal gambling and Ah Long activities, ” he told a press conference at South Klang police headquarters yesterday.

Those arrested had been remanded for further investigation, he said.

“We are also investigating whether the suspects are involved with other syndicates such as the one led by Datuk Seri Nicky Liow, ” he added.Comm Arjunaidi urged the public to remain calm as the issue of the bodyguards being assaulted for fasting had been dealt with. Large haul: Comm Arjunaidi (second from left) showing the pistol and gold bars as well as other seized items during a press conference at South Klang police headquarters in Klang. — KK SHAM/The Star

“It is more of a personal matter between those involved and it is an isolated incident, ” he added.

On Wednesday, police received a report on the man, who was supposedly upset that his two bodyguards were fasting during Ramadan.

In Putrajaya, Home Minister Datuk Seri Hamzah Zainudin said stern action would be taken against those who had allegedly assaulted two bodyguards for fasting. 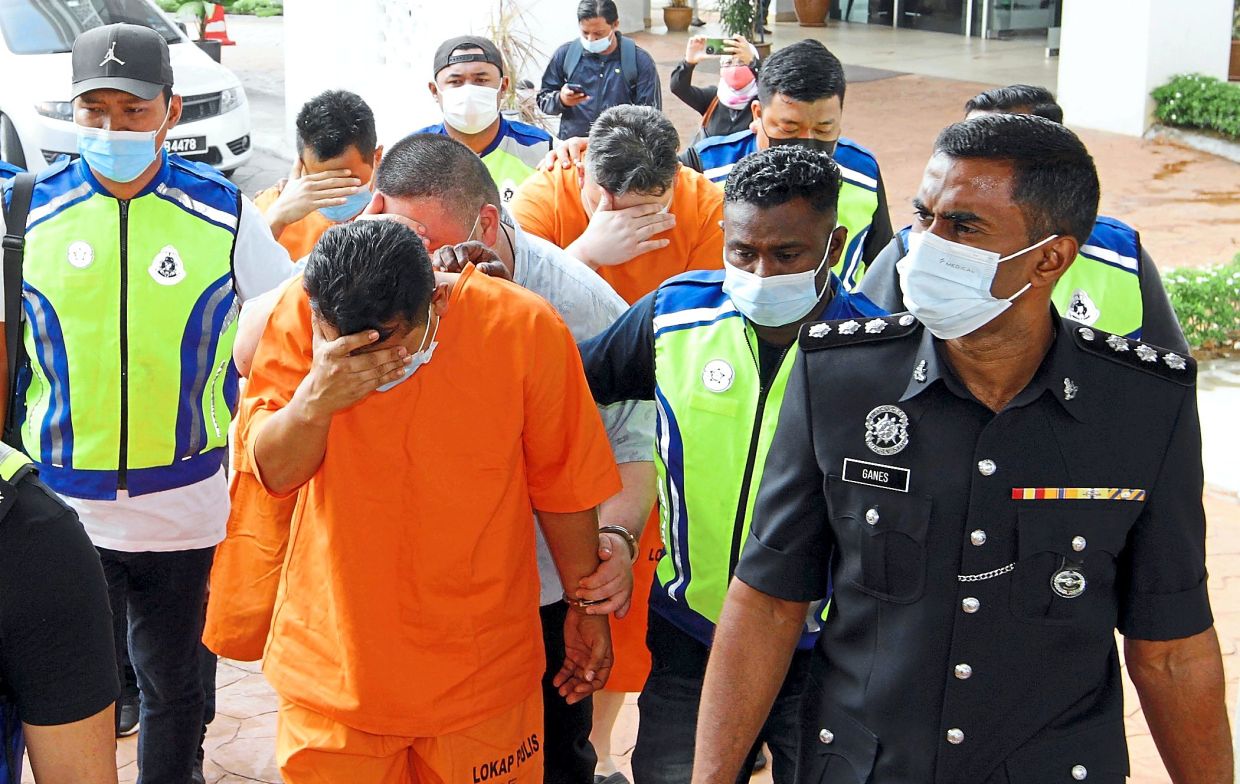 Police escorting the suspects to court in Klang.

“If the incident (assault) happened because of fasting, stern action will be taken. The bodyguards are Muslims and they are required by the religion to observe fasting during Ramadan.

“I have asked the police to investigate the case thoroughly, ” he said.

The suspects, aged between 38 and 46, have been remanded for five days to assist in the investigation.

On a separate matter, Comm Arjunaidi said the police discovered that there were many Covid-19 SOP violations at the Ramadan bazaars.

“We will take stern action against individuals who violated the SOP, including traders and customers. The same goes for bazaar organisers, ” he said.

“The top offence at such bazaars was lack of physical distancing. We hope traders and customers will take heed and adhere to the SOP.”

“We are also looking to increase roadblocks statewide and will perform more stringent checks during the weekends, ” he added. Balik kampung: Over 130,000 students leave varsities for Hari Raya at home
Special mission to repatriate M’sians in India
Cops to probe ‘interference’
Federal govt increases allocations for states
Najib and shop manager to be fined
M’sian workers upset over Singapore’s extended quarantine period
Probe into SOP violation by Neelofa, husband in final stage
No letting up as new Covid-19 cases remain above 3,500
Bazaars, malls visited by Covid-19 positive individuals identified
Adham: No delays, programme may even end ahead of schedule