KUALA LUMPUR: A group of construction workers and suppliers are demanding that their wages be paid after a manager of a subcontractor refused to pay them for job done last year.

a group of workers, supervisors and suppliers told the media their problems started in February last year.

“We were working on an upscale condominium in the Mont Kiara area and around February last year, our pay did not come in.

“This continued on and the manager just disappeared. We know that the main contractor of the project had already issued payment to him but we have not seen any money, ” said a supervisor who only wanted to be known as Nick.

He added that the project was going smoothly right until the start of the first movement control order in 2020.

The project, which he said has now been abandoned, had changed contractors midway.

“We had to borrow money to pay our staff. The foreign workers in the project had to work overtime and around the clock but they did not receive their salaries for February and March of 2020.

“The manager owes all of us collectively around RM400,000, ” he said, adding that the manager owed money to around 60 people.

Chong said that he spoke with the manager last month, and that he was promised that a solution would be found.

“I said to him that whatever you do, your workers must be paid. He gave me 101 reasons why the salary was not paid but promised it would be settled soon but until now nothing has happened.

“He has also disappeared and it seems like he has blocked our numbers, ” he said.

Police reports were lodged by the group in April this year.

Chong added that he had also assigned a lawyer to oversee the case.

“Whatever it is, you must always pay your staff. They come here to work to provide for their families. Not paying them is cruel, ” he said. 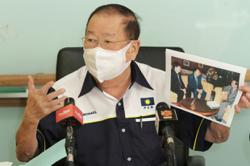