Abdul Hamid said this after attending a meeting with the Operasi Bersepadu Khazanah (OBK) task force organised by the Wildlife and National Parks Department (Perhilitan) at a hotel here on Friday (April 9).

This follows the charging of sixteen members of the Nicky Gang at the Petaling Jaya Sessions Court on Friday for involvement in organised crime activities.

He added that Nicky was charged in absentia under Section 130V of the Penal Code together with his personal assistant, who is also believed to be a gang member and is also still at large.

“Nicky and his assistant, a female Chinese national named Niu Zhe, were charged with being members of an organised criminal group," Comm Ayob Khan said in a statement on Friday.

Comm Ayob Khan said the two accused face a jail sentence of up to 20 years if found guilty.

He said Datuk Seri Lim Kim Ming, an auditor, was charged under Section 130W of the Penal Code for his collaboration with the gang.

Rogue Datuk Seri on the run with bags of cash

Tightening the net around Nicky: Border checkpoints on alert for fugitive Datuk Seri 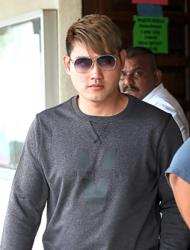