More roadblocks to be mounted

NIBONG TEBAL: With new Covid-19 clusters emerging due to unnecessary travels, Bukit Aman says it will increase the number of roadblocks at state borders ahead of the fasting month as many are expected to attempt to balik kampung.

He said as returning to the hometown to break fast with family members, especially the elderly, on the first day of Ramadan was a tradition in Malaysia, many would attempt to make the journey.

“Our Covid-19 cases are supposed to drop but new clusters are emerging due to unnecessary movement.

“Enough of advice. Action will be taken against those who travel interstate without justifiable reasons.

“Stop it. Let’s break the chain and hopefully, we get to celebrate Hari Raya Aidilfitri this year without many restrictions, ” he said at a press conference here yesterday.

This year’s Ramadan is expected to start on April 13.

Comm Zainal Abidin said following a meeting with the heads of various government departments and agencies, they agreed the numbers should be increased to prevent unnecessary interstate travels.

On stricter criteria for interstate travel, he said the police would not prevent people from crossing borders as long as they have justifiable reasons.

“There are 1,001 reasons that they can use but they must be justifiable.

“We only look at the supporting documents provided and we won’t go into detail of their itinerary, ” he said, responding to a notice at a police station in Kuala Lumpur that said applicants for interstate travel permission would have to list out their activities before being allowed to cross states.

Comm Zainal Abidin also said that high traffic volume was expected during Ramadan, although people were refrained from travelling freely.

“Among the common reasons are attending funerals, visiting sick family members, medical check-ups and work or business. All applicants must justify their applications with supporting documents.” 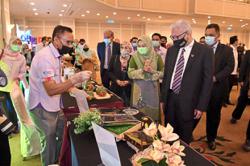