"We will investigate to determine the authenticity of the recording and what the conversation was about. If the conversation did not take place, this means that it is slander," said the Home Minister.

He added that if the conversation between Ahmad Zahid and Anwar is genuine, it is a matter for both men to resolve themselves.

He said this when speaking to reporters after launching the ceremony marking the start of the development of the National Integrated Immigration System here on Thursday (April 8).

"I heard that in the audio clip, Ahmad Zahid had acknowledged Anwar to be his teacher. Is it a crime for Anwar to be called 'teacher' if it (the audio) is true?” he said.

Hamzah also commented on the alleged conversation between the two leaders with regards to cooperation between Umno and PKR.

"Is it a crime if Umno wants to work with PKR? It is up to them to say if it is wrong," he said.

He added if both leaders denied such a cooperation, there was no need for Anwar to make his previous claim of having support of a formidable number of MPs in Parliament.

"So, why is there the need (for Anwar) to send a letter to the King," he said, adding that it is both up to Ahmad Zahid and Anwar to clarify the issue.

Hamzah was asked to comment if police investigations would be carried out into the leaked audio recording.

On Thursday (April 8), Perlis Umno chief Datuk Seri Dr Shahidan Kassim said he would be lodging a police report over the audio recording as his name had cropped up during the alleged conversation between the two leaders.

On Wednesday (April 7), an audio clip of a conversation between two voices sounding like Ahmad Zahid and Anwar went viral.

Ahmad Zahid and Anwar have since denied being involved over the recording. 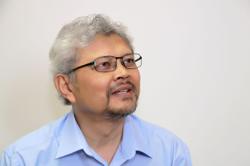